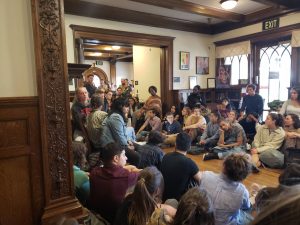 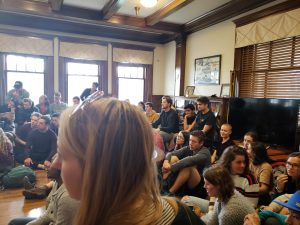 I was hoping to write my first blog post for Ecofeminism on the material that we engage with in the class and how I feel we as students react to it in classroom settings. However, given the events of this past weekend and the dialogue that happened on Monday in the Glass House, I feel as though it’s important to take the material that we have been learning and apply these concepts to real campus life.

For those of you who don’t know, on Friday night a group of international students of color attempted to enter 122 Weber (commonly referred to as the Hockey House considering a number of hockey players live there), and were not only violated but also humiliated as they were violently prohibited from entering the party. The group composed a letter and published it on the CC Free and For Sale Facebook page, where it caught campus attention. The hockey team and the group of students agreed to meet on Monday for an open dialogue in the Glass House.

Having lived in the Glass House myself and having attended a number of events there, I can say I’ve never before seen the quantity of people in the Glass House that I did on that Monday evening. I would estimate that about one hundred students were crowded into the space to listen and participate in the dialogue, which was facilitated by Vice President of Inclusion Cam Mongoven. The dialogue opened with Jacqueline Nkhonjera, one of the students in the group who experienced violence, reading the original letter from the Facebook post. The letter was followed by a reading of a prepared statement from the hockey team. The conversation then opened up into an hour-long dialogue which started with sharing thoughts and experiences with the rest of the group and then transitioned into a space for sharing ideas on how to combat racism in the party scene and on-campus in general.

Of course, I immediately thought about the ecofeminists that we’ve been studying in class and what their responses would be to this blatant act of violence and injustice on our campus. I took the question to my class yesterday, who discussed the lack of accountability among hockey players which leads them to deny the racism that permeates their social events.

Even our Ecofeminism class, taught by a male professor, is completely made up of women. We agreed as a class that the resources are obviously available on-campus (such as our Ecofeminism course), but students just aren’t taking advantage of them. The class and I talked about perceptions of inclusivity in on- and off-campus social events and how ecofeminists would pursue equity through diversity in teaching and learning in higher education.

But at the end of the class, we agreed that the dialogue in the Glass House was a good step, but not far enough for an ecofeminist. An ecofeminist would ask: what actions can we take that will create a system of accountability for students who perpetuate racism on this campus? How can we not only create an anti-racist institution that fosters diversity and intersectionality, but also have those values reflected in the micro-levels of the institution, such as in classes and at social events? An ecofeminist would demand more not only from the community, but also from the self, reminding us that we are all complacent in the racism on this campus unless we are continually and actively fighting it. May this post remind us that we all carry the events of Friday night, and any other events where students of color have ever felt threatened or unsafe, on our back, and we will carry the responsibility of these events with us around campus until we stop them from happening.

One reply on “Ecofeminism and the Hockey Team”