Do White People Suck at Irony? 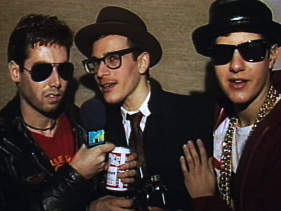 As we enter the third week of class, a pattern I’ve noticed in our discussions of white consumerism in hip hop is a consistent misconstruing of the racial navigation of white artists. I understand that’s a mouthful. To put this issue in context, let’s go back to 1986. It’s November. Artists such as the Sugar Hill Gang and RUN-D.M.C. have budded as early stars in the world of commercial hip hop. However, three white, upper middle class, Jewish kids are about to burst onto the scene and shatter any preexisting notions of what it meant to have a lucrative career in hip hop. Of course, I’m talking about the Beastie Boys’ debut album Licensed to Ill which would become the best selling of its decade. Boasting hyper-masculine frat boy personas and playing with their punk rock origins, the Beastie Boys rose to number one on the Billboard with their smash hit “Fight for Your Right.” Throughout its music video, the three emcees can be seen spiking drinks and inciting chaos at what was supposed to be a mellow party. The scene culminates when the entire apartment is destroyed with pies and sledgehammers. It’s hard to believe that Adam Yauch, known as MCA, would go on to become a devout Buddhist and protest U.S. foreign policy at the VMA’s after watching him set his meek party host’s issue of Popular Science on fire. Yet, after listening to more of the Beastie’s discography and listening to interviews I realized that these songs are more socially conscious than meets the eye. That’s not to say they’re not problematic for other reasons, but they become a jumping off point for my exploration of how white consumers often miss the forest for the trees when understanding how white artists grapple with their race in the historically African American art that is hip hop.

In order to understand this phenomenon, I need to first define what I like to call the cycle of post-ironic consumerism. Hip hop is a responsive artform. Songs such as Grandmaster Flash and the Furious Five’s The Message use ghetto realism to speak out against the condition of the South Bronx. This is where the cycle begins: with an issue. For the Beastie Boys, the issue they spoke out against was the toxicity of what we might call “jock culture.” While they employed hip hop as a means to address this issue, their performance as larger than life characters used irony in a groundbreaking way to exaggerate the characterization of the group they sought to expose. These tropes include reckless violence and aggressive misogyny to name a few.

And so we reach the next stage in the cycle, responsive performative irony. This is the exploitation of the issue’s own imagery to expose its shortcomings. It is my view that the song’s chorus is evidence of its own self awareness. Between each verse, the three shout “You gotta fight for your right to party.” The pause between “fight for your right” and “to party” echoes calls to action in protest anthems like Bob Marley’s Get Up Stand Up and then turns it on its head by narrowing the scope of that call to white male youth. The allusion to the structure of revolutionary music A) recognizes its existence and then B) sets up the issues of its audience as frivolous, i.g., “your mom threw away your best porno mag.”

Where this issue comes full circle is a post ironic reception by consumers. Somewhere between the initial conception and final rhetoric, the message becomes more ambiguous and is interpreted in its literal connotation. The ironic tropes are effectively embraced with sincerity and therefore reinforce the original issue at hand. The climax of this can be seen during a 1987 concert in Liverpool the show was shut down within its first ten minutes due to a riot. MCA faced a subsequent assault charge which led the group to reevaluate their image.

While I do not believe the group wrote this song with malice, I also don’t believe they were prepared to deal with the monster born out of the idiocy of their fans. On the other hand, without their use of convoluted satire they would have never been able to build a fandom that included not only those who understood their music, but also the listeners who took their image at face value.

This may seem like an isolated happenstance, but around the turn of the century, we take another ride on the cycle of post-ironic consumerism. This time, the artist in question was none other than Slim Shady. In an article by Loren Kajikawa, she articulates that just as the Beastie Boys did on Licensed to Ill, Eminem navigates his racial identity through a critique of white middle class culture in order to not emulate, but show allegiance with the African-American community as well as brand himself as a working class underdog dissociated from his own white privilege.

To be a white rapper is in and of itself a niche. As demonstrated by the Beastie Boys and the downfall of Vanilla Ice, the key to being successful within said niche is having a unique image, one that speaks parallel to African-American voices, but within the parameters of one’s own race. While the Beastie Boys took on upper class chauvinism, Eminem ducked the question of race by criticizing white societal archetypes perpetuated by conservative culture. This disconnect from suburban life was marketed towards straight white men who grappled with their identities in a society that fails to racialize white people. My Name Is is an attempt to break from the constraints of the Tipper Gores of the world and give oppressed positionality to young men rebelling against their own comfortable lives.

While Em performs as the figures he loathes in the music video for My Name Is, he certainly was not appeasing them. His visual performance, perhaps better choreographed than the Beastie Boys’ struck a nerve with middle class white male youth who could laugh along with Em at images they’d grown up with like the Brady Bunch and a hypersexual President Clinton.

While the product of Eminem’s music was a generation of vindictive white men, the post-ironic consumption of his music comes not from the youth who understood his message, but the parents of said youth who only intensified their own allegiance to conservative values. This manifested particularly in censorship which Eminem was on the receiving end of and addresses in The Real Slim Shady. While the song stands by further unnerving of the same audience by calling on them to be “proud to be out of your mind and out of control,” it also objects to his critics through lines such as “Will Smith don’t gotta cuss in his raps to sell records (Nope) Well, I do, so fuck him and fuck you too!” and the chorus “I’m Slim Shady, yes I’m Slim Shady. All you other Slim Shadys are just imitating.” The former is taking aim at the same demographic he took on in My Name Is and the latter is an acknowledgement of the movement he’d created through his work. Regardless, just as with Fight for Your Right, the ironic representation of a targeted issue only served to antagonize and exaggerate it in a more roundabout way.

So why does this matter? The aim of this article is not to make accusations about ineffective delivery or to claim that consumers are stupid. On the contrary, it is to question the model which white rappers use to enter hip hop. I would argue that while self deprecating humor and ironic depictions of one’s own culture have proven to be valuable in the longevity of one’s career, they can also be limiting artistically and do more to perpetuate than correct faults the artist sees in society. The Beastie Boys struggled to escape the boombastic characatures they’d made themselves into as their sophomore album Paul’s Boutique flopped financially despite its critical acclaim. The following they had built wasn’t necessarily interested in pop culture references and the Dust Brothers’ use of funk samples. The group also spent the rest of their career rebranding as socially conscious, especially through the activism and lyrics of MCA who famously said on sure shot:

“I want to say a little something that’s long overdue

The disrespect to women has got to be through

I want to offer my love and respect to the end”

It was through their more direct verses that the Beastie Boys were able to not only speak on issues with clear intent, but also maintain relevance until the passing of MCA. Simultaneously, Eminem struggled in his own career when his album Relapse suffered from poor reception due to the dragging out of the same identity that he used to rise to fame. It wasn’t until Recovery that he was able to open up about issues with substances and his own emotions that rebounded his career. What’s evident through both the music of Eminem and the Beastie Boys is that while irony sells, it’s not existentially or artistically fulfilling.

My name is Mason Castle and I was born and raised in Walden, Vermont. I'm a freshman at CC and plan on majoring in music. Outside of class, I compete on the cross country and track and field teams and enjoy skiing in the rockies.