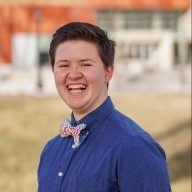 Hi! My name is Bridget and I am a third year from Denver, CO majoring in Mathematical Economics. I'm interested in the intersections of disciplines - especially how math connects to other parts of life - which often drives the academic circles I find myself in. I also really enjoy spaces where I get to share what I have learned with others (so yay blogging :)!).

Art and Math – a perfect pair

I attended an arts school for 7 years before college. Starting in the 6th grade, I spent an hour-and-a-half every day honing my skills as a filmmaker on top of taking my other classes for the normal middle/high school core curriculum. My peers were all artists as well, each focusing on one of 11 different art majors. Our teachers recognized the power of having a room full of artists and used this to enhance the learning that took place in each classroom.

It would be impossible to count the number of projects I had to do where I was tasked with taking the classroom material (be it the novel Jane Eyre or the Krebs Cycle) and converting it into some sort of artistic presentation. At the time, I think a lot of us scoffed at being told to mix our academics with our arts, but the skills I learned by doing this work still benefit me today.

In college, so many of our summative projects are papers or exams. A dry regurgitation of the material achieves the aim of assessing how well the content was absorbed, but often doesn’t task us to really contextualize our learning. When professors assign something more creative, they make space for students who process differently to flourish, and this often leads to the creation of really cool final products.

The final for this class is not an exam or a report but is instead an open-ended choose-your-own-topic presentation of material. I love it.

I jumped around a lot when it came to picking a topic and medium for my project. I wanted to do something that was fun and would introduce my peers to new information. At first, I figured I’d make a film since that’s where I’m most practiced. But without a film crew or time to animate, I thought maybe a website would be easier. As I started considering topics to study, I realized something visual was going to be extremely necessary if I wanted to tell my information in a way that was easy to understand. I ultimately decided to put together an illustrated book (I hesitate to call it a children’s book since the content is a bit complex). 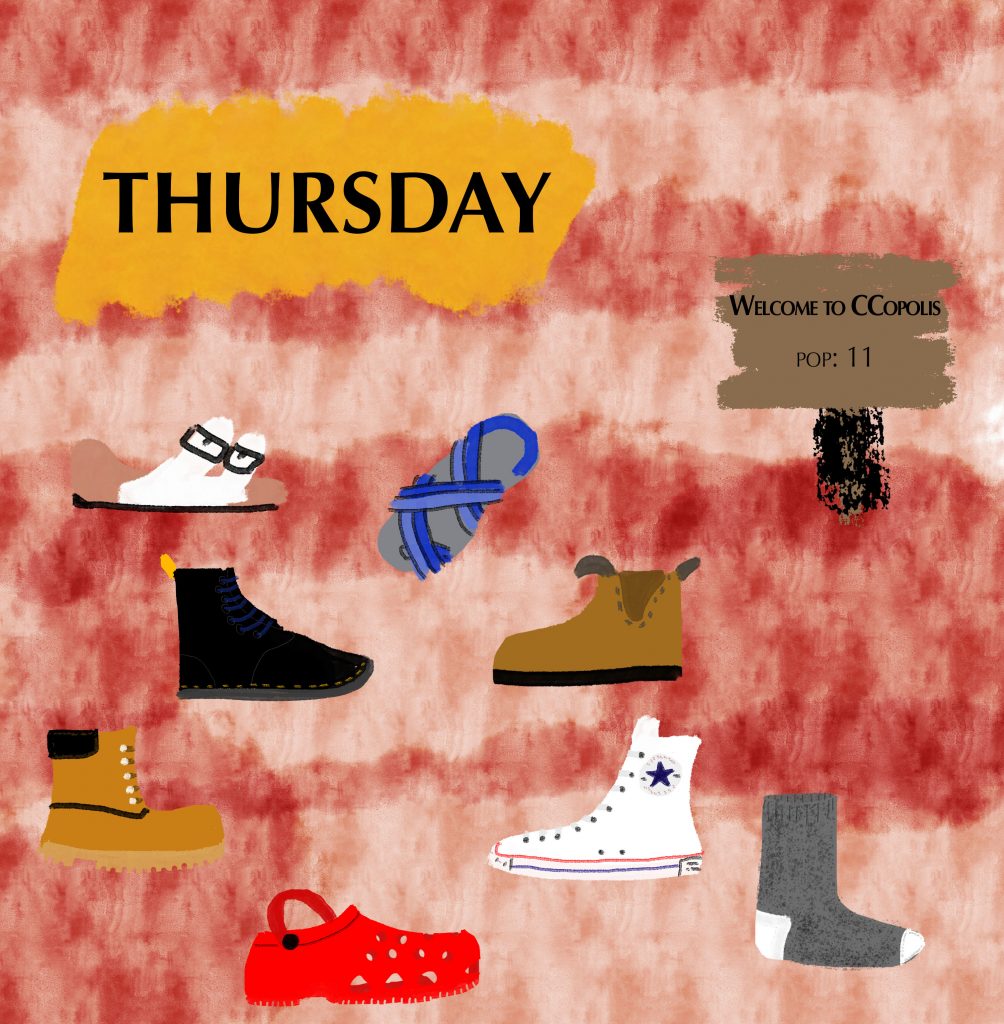 This process has been so much fun. I spent an hour on Thursday just drawing detailed depictions of various shoe types (I promise it’s related to my project). I had the opportunity to play with art, narrative, and parody while also coming up with ways to explain a fairly complex mathematical concept. It was definitely a challenge trying to take what could easily have been a 5-10 page paper and distill it into less than 1000 words, but, as a result, I was able to gain a really solid understanding of the material for myself as well.

I wish more CC professors would offer open-ended projects like this. I don’t mean that we should get rid of exams and papers all together, but I do think more emphasis on finding the intersections between ideas would only help with student learning. That’s the point of the liberal arts anyway, isn’t it? 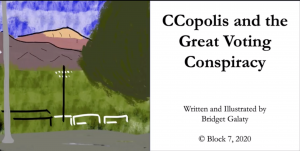 The title page for my book 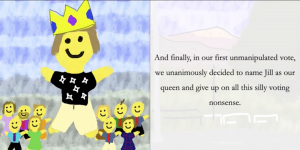 If we make Jill our dictator, will she not leave for Nat Geo?

Why I Love Math

Growing up, I always liked math. I enjoyed the challenge of being faced with a problem and trying to figure out the tools and method needed to solve it. It was cool getting to see how the world around me could be described through the lens of mathematics. Unfortunately, as I reached higher levels of math, the problems we were solving stopped being grounded in real-world problem-solving. Where math used to be asking questions about the speed of a rock rolling down a hill or the number of games played in a baseball tournament, it was now verging into higher dimensions and abstractions that had lost touch with the everyday problems facing people.

While coming into college I had considered being a math major, after taking upper-level classes, I found myself put off by math that seemed so devoid of life. I didn’t care about the volume of a 15th dimensional sphere or how to solve a Diophantine equation. Instead of pursing the traditional theoretical math track, I found refuge in the world of applied mathematics. Here, I was still allowed to ask questions about problems that were relevant to the world around me. I decided to pursue a mathematical-economics major in order to find compromise between my joy for math and my need to have my learning grounded in reality.

These days, I spend a lot of time thinking about the types of problems that people are faced with and the tools that they use to make decisions. I am given the task of trying to use existing information about people and predict their future actions. Math has begun to reprove to me that it is important to the world of real people. With a few relatively simple mathematical tools, I have been able to explore the value of getting a college education for future life success and the value of using the Electoral College to conduct US elections.

I think it is unfortunate that one of the few CC classes specifically focused on applying math to the world is billed as “Not Recommended for Math Majors”. What has been really cool about this class is the variety of experience that everyone brings to the material. Some of my classmates are Political Science majors, others are writers, others of us are here for the math, and some people have no idea what they want to study. Because we all have different ways of viewing the material, we are able to have really interesting conversations that would not happen in other math classes where people only care about the mathematical processes.

The prevailing narrative that math is a defunct subject that tries to be as confusing as possible is just not true. Anyone can benefit from thinking mathematically as is evidenced by this class. For me, the world of applied math has rekindled my love of mathematics, and I hope that for others it can show them that math can be relevant!

If you’ve spent any time talking about American politics recently, you’ve probably heard about how the electoral college gives priority to certain voters or how some states make it harder for some people to vote than others. You may have even signed a petition promoting a national popular vote or rallied to enfranchise citizens who have been traditionally not allowed to vote. The idea that voting isn’t exactly fair is probably not surprising. What might be surprising is that, no matter how hard we try, we can’t actually design a voting system that is fair.

This block I am enrolled in MA110 – The Mathematics of Social Choice. This class focuses on how groups of people make decisions. The first week of the class, we examined a variety of different voting systems (which is a fancy way of saying ways to take people’s preferences and decide who wins an election). What we found out through exploration of these systems is that for elections with more than two candidates, no voting system is truly fair.

So what do I mean by fair? Before I list the criteria that we outlined in this class, I suggest taking a couple minutes to think about what you think a fair voting system might look like….. Okay, got your list? Now let’s compare.

Here are some of the things we decided should be fulfilled by a fair voting system:

How does this list stack up to your list? Did we come up with any criteria that you hadn’t thought of or do you have any you want to add to our list? Hopefully, you’ll agree that these are some important things to have in a voting system. Here’s the thing though – there doesn’t exist a single voting system (no matter how hard you try) that will satisfy all of these criteria at the same time. There’s a whole Theorem (called Arrow’s Theorem) that proves why this is the case. Ironically, one of the systems that is closest to meeting these criteria is a dictatorship! (It only violates the ideal that every vote should matter the same.)

At this point, maybe you’re resolved that it might be okay to drop one or two of these criteria (though not the one that lets it be a dictatorship!). If you’re okay with that, then I do have some solutions for you! Check back for a later blog post with some ideas for voting systems that seem okay.