It’s snowing in Park City. There’s at least a foot and a half on the ground right now. The sun peeks through a blanket of fog, but it’s not bright enough to rouse the rest of the house this morning. This is the first day in a long week that we have nothing to dash off to. With the festival over, I wonder what the town will feel like once we do meander into a few of the coffee shops. Over the last five days it has been a moving machine – with about two hour intervals between the movies we saw every day (from 2-6 of them) we only had time to send text reviews to each other and stop for coffee on the main street before sitting still for another 2 ½ hours in a dark theater. I’ve cried and laughed at the most amazing stories and spoken to some incredible filmmakers here, and barely have had time to process those feelings before I am running to the next thing. I’ll try to process them in smaller tidbits here.

Day 1 – Ticket mania, ticket “fomo,” I can’t find the right theatre, WOW I’M AT SUNDANCE, an intense historical fiction film about pregnant nuns and a French Red Cross doctor, a bad documentary about a film buff, and a new wave girlhood film about a 12 year old who turns from boxer to dancer. (Agnus Dei, Film Hawk, and The Fits.) Agnus Dei and The Fits were directed by women, and I babbled through an incomprehensive conversation (on my part) with Fits director Anna Rose Holmer to find out that most of her department heads were women as well. Encouragement! 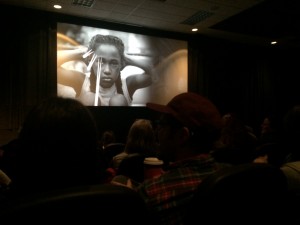 Still from The Fits, directed by Anna Rose Holmer

Day 2 – I am sitting here watching a movie about a doctor from the 30s who put goat testicles into impotent human male testicles. The documentary director is a spunky, screamingly intelligent woman who grew up on a ranch in the middle of the country and is screening a film that collaborated with seven different animators at the Sundance Festival. Later in the afternoon I see a film called Cameraperson – a meditation of visuals collected from one cinematographer’s portfolio. I think about death and life and sometimes I need to remember to breathe evenly while I’m watching it. Then we see a collection of documentary shorts that none of us are very impressed with. (NUTS!, Cameraperson)

Day 3 – I am seeing 5 films today, and I can barely keep my eyes open from yesterday. The first has a strong script, but I feel more engaged in my twenty-minute conversation with a senior from USC beforehand. We talked about theory versus practice while her mom interjected every once in a while to exclaim that this movie was her pick. Next I see a Columbian film that would go on to win the Audience Award for World Dramatic Cinema. The older man beside me ended up gripping my arm halfway through as we both tried to play it cool and stop sobbing. Afterwards the filmmakers spoke beautifully about their relationship with their audience and arts for arts sake, not commercial benefit. Too soon after the film is over, we are filed back into the same theatre for the Dramatic Shorts program. A policeman who dances at his mother’s funeral in Thunder Road makes us keel over with laughter, a great cure for my blotchy face. After a quick dinner I move on to a film about prostitutes in Mexico City. I’ve fallen in love with at least four of the women by the end. Much later we go to the midnight screening of an Indian film satirizing the class system, following 4 teenagers trying to get laid. It is not one for my 11 year old brother to see. (Mi Amiga Del Parque, Between Sea and Land, Dramatic Shorts Program, Plaza de la Soledad, and Brahman Naman.) 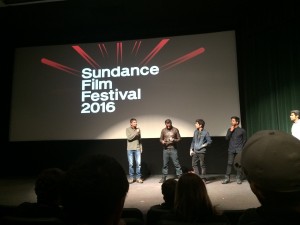 The Director, Writer, and two lead actors of Brahman Naman.

Day 4 – Snow is dumping today, and though I’m a Colorado native I have completely failed to prepare for this weather. Walmart shoes falling apart, I make my way to three films today. The first, a contemporary Romeo and Juliet love story between two women that makes me cry at 8:30am. The second, a hilarious, Little Miss Sunshine-esque family road trip featuring Aragorn from Lord of the Rings. The third is the Animation Spotlight collection. I am amazed at what people are able to imagine and make tangible… our technology is truly limitless. (Lovesong, Captain Fantastic, Animation Spotlight)

Day 5 – I only am able to get one ticket today because it’s the last day of the festival. I get into the World Documentary Grand Jury screening of Sonita. An Afghanistan teenage girl raps about the arranged marriage culture of Iran which she may be forced back into if she cannot escape her family. When I get out of this film, we see that there is already about six inches of snow on the ground, and a massive blizzard is predicted to blow up from Colorado Springs through Wyoming and Utah in the next two days…so we decide to stay in Park City. We all celebrate with a huge dinner in town, laughing and toasting to the amazing week we’ve had. 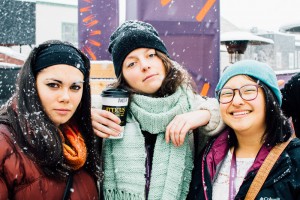 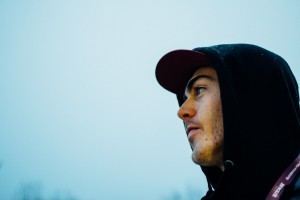 Now there is two feet outside the window I’m sitting next to. The class is huddled around me in our cozy kitchen. Someone made tea for everyone, and our professor brought back bagels this morning after we took a class photo in front of the Sundance sign. We’ve got two snow days ahead of us, and I couldn’t ask to be surrounded by a better group of people for it.

The Sundance class. A test of faith in today’s film industry. Will it do justice to our world’s best storytellers? What has the Sundance Festival become over the years… is is a portal to project new filmmakers into the blockbuster world? Will it toss anyone into that fray other than baseball cap wearing white men? (“No!” says the release of the late Jurassic World.) Or is the festival an end goal for independent filmmakers? Is it both a cannon and a finish line? What defines a Sundance film – what topics to they cover and how? Who is making the movie and where do they come from? How do these films compare to the Hollywood world? Around 2300 films were submitted to the Dramatic Features category in 2015. The Festival accepted 79. Is the scope of the indie world too massive to conquer these days, and what has that competitive nature done for the filmmakers vying for one of those spots? ALSO we get to go to this thing – did I forget to mention that? Who knows, this time next week I could be sharing a cheese plate with John Krasinski, foolishly reminding him of the best Office gags he pulled off.

The many many many questions we have asked ourselves within the first week of this class. My brain is exploding with tangents. Perhaps I’ve alluded to some of those answers by asking the questions…I hope so, because I hardly have definitive answers for any of them. In summary, yes, the festival has evolved into more than a screening festival, which is what we would call the Telluride Film Festival. Sundance is prestigious and selective, but does a much better job at supporting a variety of subjects and filmmakers than the Oscar/Hollywood worlds do. Today, 1.9% of Hollywood directors are women. At the 2016 Sundance Film Festival, 29.9% of directors are women. Still an appalling number when you say “only 29.9% of women are directing Sundance films,” but it makes me feel a lot better than that dismal attempt at a 2%. It’s one of my goals to see as many films by female directors next week as possible and bombard them my intellect so they hire me instantly. (This is very unlikely, as I sweat a lot when I try to talk to people after performances and end up exhibiting my elementary vocabulary well. “That was sooooooooo good, you are sooooooo good at stuff.”)

After watching four films this week and discussing them with my peers, it still seems there isn’t a formula for a perfect movie. Duh, right? We followed one structure to write our own 15 page screenplays (in one night – hello block plan), but still had an incredible variety of structures pop up in the results. We spent hours talking about the how the tiniest detail in a screenplay makes the entire film’s theme resonate perfectly. Hours of digging through taboo topics in the films we watched contemplating their successes and failures.

Filmmaking is a push and pull that you have to get a grasp on just long enough to connect with an audience so they’ll pay attention to you for an hour. Or even 30 seconds. It’s an overwhelming business at the same time that it’s an overwhelmingly beautiful art. In this class we are edging towards finding a balance between the two. We watch, write, talk, learn, yell, process, and start again.  We keep trudging down this path of doing, doing, doing until we can end up making something we admire. I hope to observe this admiration in the people I meet and the films I see next week, so I can be reminded again to keep doing (and stop staring at blank Word documents).

More to come! Thanks for reading.