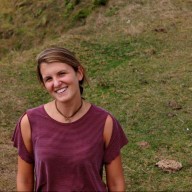 Hello! My name is Sophia and I am a sophomore political science major at Colorado College. I am also the head of CC's anti-human trafficking club and I write for The Catalyst and Cipher. I am a novice mountain biker, a mediocre skier, and an occasional cook. I love CC because the schedule and the learning environment gives me flexibility and independence to explore my interests.

The past two and a half weeks have been filled with various Chicago explorations but the nature of the block plan is bringing me back to reality. The pace of the class is definitely quickening as we wrap up third week. 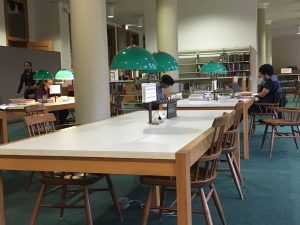 All twelve of us spent most of today in the Newberry Library. While Lena braved the meat-locker temperatures in Special Collections, the more faint of heart set up camp on the second floor.

I definitely wish I spent more of the first two weeks familiarizing myself with the request process at the library. However, I  feel like I finally have a strong foundation for my research project. I am exploring the history of Chicago’s parks and to what extent they have served as vehicles for social and environmental change. Meanwhile, Mary is working on a paper about Gwendolyn Brooks. She even interviewed a man in Bronzeville who knew Brooks! Other projects include a look at the history of women and mental health, Jazz in Chicago, art and the Chicago Fire, and the Peruvian Amazon Company’s atrocious treatment of native Amazonians. Next week, we will present our findings to our classmates and turn in our papers. 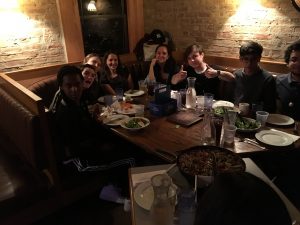 It’s hard to believe we only have one week left in Chitown! Thankfully, we checked one box on my bucket list last night. Bill took us to Pequod’s, a pizza place in Lincoln Park that’s famous for its deep dish. While we munched on mozzarella sticks there was a contentious debate about what pizza to order. Some argued for a thin-crust option but Bill demanded that we order strictly pies because we are in Chicago. Unsurprisingly, the man footing the bill got the final word. I was just happy that I got cheese and carbs in various forms (somehow, our table was populated by mozz sticks, cheesy garlic bread, and pizza all at the same time). 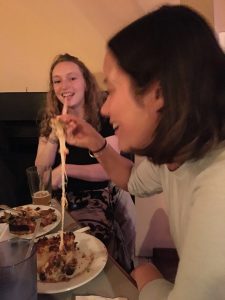 We finished the night with a fantastic view of downtown and a discussion about Michigan Lake vs. the ocean. Personally, I need the wild energy of the ocean to feel grounded. Others said that any water that extends into the abyss has a calming effect. The jury is still out I suppose.

A Trip to the Museum 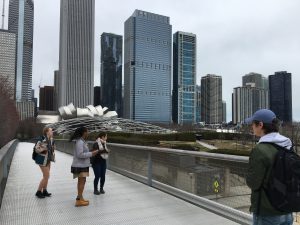 In the past two weeks, my classmates and I have wandered through various parts of Chicago. From Uptown to the UChicago campus, we’ve passed walls of murals, popped our heads into random music venues, people-watched at Lincoln and Millennium park, and eaten nearly everything in sight. Nevertheless, visiting the Chicago History Museum illuminated many aspects of this city and helped me to see the various neighborhoods through a historical lens.

We visited the museum in lieu of class on Friday and were encouraged to take our time at each exhibit. I savored every moment, as I hope to do my final project on the history of Chicago. This coming week we are working on these independent research projects at the Newberry Library. While we are permitted to explore any topic that the library’s collection specializes in, I want to learn more about Chicago. I am particularly interested in the planning of the city. In what ways did city planners push a segregationist agenda? What measures have been taken to create more integration of race in class in this city? Do the lines that were drawn between neighborhoods limit certain groups’ access to public spaces? These are all questions that I want to explore by utilizing the Newberry’s collection.

The Chicago History Museum placed a focus on this topic through its various exhibits. One plaque read, “the contours of the city have been shaped by successive waves of people from various parts of the U.S. and other nations.” While this can be said of practically all of America’s cities, I found it particularly interesting because it connects to something we discussed in class during our first week here. That is, we learned that it’s important to understand that a city is a palimpsest. Like a piece of writing, cities often have a layered history wherein certain aspects of it may be erased but traces of its history remain. Each neighborhood has a legacy of its past. For example, a few students took the wrong bus one day and ended up in a neighborhood called “Back of the Yards.” We later learned that this name is an allusion to the area’s history of stockyards. Chicago is known for its meatpacking past. I learned in the museum that a combination of labor struggles and negative environmental impacts contributed to its demise.

Also in the museum was an exhibit about Chicago’s jazz scene. While jazz has its roots in New Orleans, it spread north to Chicago during The Great Migration and legends such as Louis Armstrong took the windy city by storm in the 1920s.

I scribbled various notes throughout my exploration of the museum. Each serve as a sort of “seed” for my research. I want to know more about A. Phillip Randolph and the Chicago Housing Authority. I hope to explore the intricacies of the 1996 “Plan for Transformation.” Most of all, I’m excited to delve deeper into this city’s influential figures. From Superintendent Ben Willis—who is notorious for school segregation in Chicago—to the admirable nurses and doctors at Provident Hospital, the first African-American owned and operated hospital in America. Overall, I learned a little about a lot of different topics at the museum which will serve as a broad base of exploration in the coming weeks.

Chicago Transportation at A Glimpse

Hello there! I am reporting from Chicago, IL. Eleven other students and myself are taking “The City vs. the Country: Literature of Nature and Urban Spaces” with Professor Bill Davis. A huge part of the class is exploring Chicago independently, so I thought I would delve into the different ways of wandering the city.

While our classes are located at Newberry Library, just a short walk away from our apartments, all the students have taken advantage of our 30-day subway pass. Bless the L! I grew up in Houston, where public transportation goes to die and you have to pry people away from their cars by their cold, dead hands. Thus, I do not take public transportation systems for granted and being able to get anywhere in the city without stepping into a car is very refreshing.

Becoming familiar with a subway map is also a very satisfying thing. I’m almost to the point where I can imagine it when I close my eyes. I can zip north or south on the red line from Clark and Division and I relish in the brown line route through the loop.

Yesterday afternoon, a few of us went to see a movie. When we emerged, it was pouring rain and subsequently, the L was packed with people. Each red line train that came was humid with hoards of commuters. We let three trains pass, hoping they would grow emptier. After waiting 15 minutes, Mary stepped daintily into the crowd and her body was absorbed into the tube of humans. I admired her assertiveness and the rest of us caught the next train.

But I love it. I love how everyone faces skyward, like fish out of water. I love that I can stand without holding on because the strangers around me hold my body up. I love the dank smell of sweat and cigarettes and exhaustion. 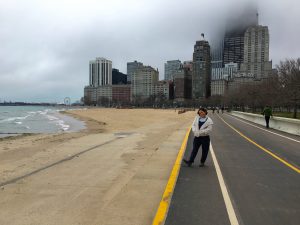 I took a 15-minute nap this afternoon; I fell asleep to rain pounding on my window and awoke to sunshine. The weather here can be very capricious, so walking around the city, one must be prepared for just about anything. Nevertheless, using my two feet just to meander around Chicago’s various neighborhoods is one of my favorite ways to see the city. After lunch is a prime time for excursions and students in the class have explored nearby Bucktown/Wicker Park, as well as Pilsen. One of the best parts about Chicago is that every neighborhood has its own personality so you can digest the city in bite-sized pieces by tackling a new area every day. Pilsen, with its colorful murals and varied history, has definitely been a class favorite. Bucktown is known for its delicious restaurants and “hip” vibe. Neighborhoods still on my bucket list are Hyde Park, Andersonville, and Lincoln Park.

Ahh, lastly, we have my favorite mode of exploring the city. I borrowed a road bike from a family friend in Chicago but there is also a superb bike-sharing system in Chicago. What I love about cycling around Chicago is the independence and spontaneity it infuses into my days. 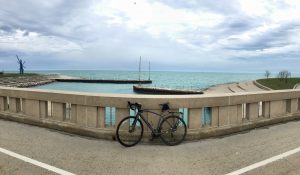 I have found that in the age of yelp and google maps, it is too easy to decide on a destination and get a sort of tunnel vision. Or in the case of the L, literal tunnel vision. Often, I find myself dropping a pin at a particular café or museum and then following the little blue dots on my map until I arrive without really seeing the places I’m traveling through. But with a bike, I get to see so much more of the city and stumble upon places that I would not have found otherwise. On Sunday, I biked past a skate park and spent half an hour watching scruffy teens sliding on rails and dropping into bowls. Today, I passed a bike shop that is female-owned and run entirely by women. I wandered in and they gave me a bunch of recommendations about various trails in the city. Biking helps me to see the different arteries of this city as a connected network, instead of a fragmented puzzle.