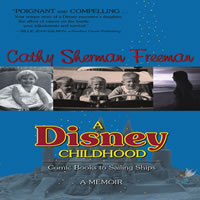 Freeman’s father, George Sherman, was head of publications for Walt Disney Studios, in charge of comic books, and Freeman grew up as part of the larger Disney Studio family. When Disney foreign representatives came to town, they would visit this “typical American family” and be escorted by them to Disneyland. The memoir is an account of Freeman’s Disney childhood, the sadness of losing her father to a rare cancer when she was 16, and a sailing trip to Hawaii in a 46-foot sailboat after her father’s death that did not go as planned.