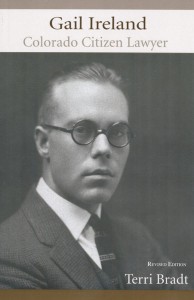 Bradt is the granddaughter of Gail L. Ireland, who served as attorney general of Colorado from 1941-45. Bradt wrote this book in conjunction with her successful effort to carry on the work of her grandfather, who was convinced of the innocence of Joe Arridy, a mentally disabled young man who was executed in 1939. Ireland worked on Arridy’s case for years after the conviction, obtaining an unprecedented number of stays in his execution from the Colorado Supreme Court. Arridy was granted a posthumous pardon by Colo. Gov. Bill Ritter in January 2011.