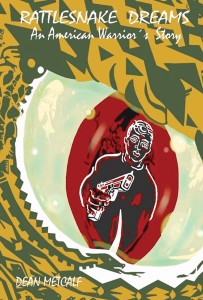 Metcalf, a U.S. Marine Corps veteran, grappled with the demons he encountered in Vietnam and in his post-combat nightmares. The book is a memoir of war, journalism, and growing up in the Pacific Northwest. Stories of his four years in the U.S. Marine Corps — in Vietnam; Okinawa, Japan; the Philippines; Taiwan; South China Sea; and the Gulf of Tonkin — and how they affected the rest of his life form the core of the book. In addition to serving as the book’s title, “Rattlesnake Dreams” also is the name of Metcalf’s blog.