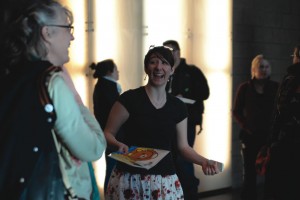 Toni Pizza ’12 has been playing games constantly through her two years of grad school at New York University.

She plans to continue that habit as an adjunct instructor at NYU this fall. But it’s not just about laughs for this accomplished woman, 25 in early August.

“Games are a good place to do a lot of things. It’s a great way to explore emotion,” she said during CC’s 13th annual Cornerstone Arts Week in January.

“What I love about games is they are so easy to share, to have a conversation about. People love to spend time playing games and it can be the perfect place to demonstrate alternate ways of thinking,” Toni explained later. The Alamosa, Colo., native said games can be an accessible and safe way to, for instance, explore topics of mental health. She described a game she’s been working on that illustrates what it’s like for someone going through depression.

“‘Prozac for Breakfast’ is an exploration of an identity constantly in flux thanks to anxiety and depression… It can be a really powerful way to communicate,” said Toni, who received her Master’s of Fine Arts in Game Design from the NYU Game Center in May. As one of the first graduates of the new MFA program, Toni said she and her classmates explored all sorts of interactive games, from outdoor activities and traditional board contests to digital games. They critiqued and designed, made spreadsheets and coded.

“I was coming at it from a sociology angle,” she said. Toni graduated from CC with a major in sociology and a minor in feminist and gender studies; she looked at the representation of gender in online games for her CC thesis. “I found a lot of misogyny and violence toward women, no positive representations of queer sexualities,” she said about her desire to impact the development of gaming.

Since then, she’s become a leader in such change. “Not as many women are working in this and people were not talking about race, class, or gender — priorities I feel are important and had spent my time at CC thinking about,” said Toni.

This year, she was co-director of the second annual Different Games Conference on inclusivity and diversity in games. The two-day event in New York City featured topics such as queerness in gaming, games and mental health, diversity in the fighting-game community, and ways to inspire a more meaningful game culture.

Toni also helped put together the second annual Lost Levels “unconference” held in a public park near the game industry’s well-established Game Developers Conference in San Francisco in March. In contrast to the structured industry event, this free forum welcomes anyone to give a five-minute talk.

“It’s a great way for people to express their ideas. It doesn’t need to be commercial,” Toni said of the less formal, increasingly popular event.

“I’m a huge proponent of games being for everyone, and they can be made by anyone,” she said. Toni is part of the “indie” or independent game movement, meaning the game design can be low-budget with lots of creative control rather than top-down with a few decision-makers determining the accepted style.

“Everyone is playing games, and we should think critically about them and their content,” she said.

Toni said “Prozac for Breakfast” and two other games she has been working on should be available online this fall. In “Kaleidoscope,” a stranded space crew resolves that none of them will die alone in the void. “Therapy Sesh” is a text-based game exploring the stress and frustration of a therapy session from the patient’s point of view.