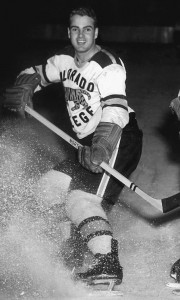 Two of the great ambassadors of Colorado College hockey history recently passed away. Ron Hartwell ’52, CC’s all-time leading goal scorer, passed away on July 20 at the age of 88, while Andy Gambucci ’53, died on Sept. 24 at the age of 87.

Hartwell and Gambucci were teammates on the team that claimed the school’s first national championship at the Broadmoor Ice Palace in Colorado Springs in 1950. Hartwell, a native of Swan Lake, Manitoba, earned a spot on the all-tournament second team after recording four goals and three assists in the two games. Gambucci, meanwhile, was a freshman on the squad. 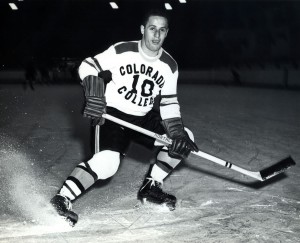 Following his graduation, Hartwell became a gifted geologist who participated in the discovery of many major oil fields that are still producing today. In his mid-30s he began his own exploration company. At the age of 70, he retired from the oil industry when the public company, HartWell Petroleum Ltd., was sold in February 1997.

He was also an avid sportsman, having a passion for golf, skiing, fishing, and hunting.

Gambucci, born and raised in Eveleth, Minnesota, was one of CC’s most outstanding student-athletes. He competed in hockey, football, and baseball and was a premier athlete in all three.

On the ice, in addition to helping the Tigers reach the NCAA playoffs in each of his first three seasons, he skated on the 1952 U.S. Olympic Team that took silver in Oslo, Norway. Gambucci finished his collegiate career with 91 points (62 goals, 29 assists).

As a running back on the football team, he broke the legendary Dutch Clark’s school record with 16 touchdowns and finished fourth nationally in scoring in 1952. He was named the Rocky Mountain Conference MVP and a unanimous all-conference selection that fall.

After graduating from CC, Gambucci turned down an opportunity to try out for the NHL’s Boston Bruins and instead went to Italy to play and coach. Upon returning to Colorado Springs, he launched a 22-year career as an on-ice official in the Western Collegiate Hockey Association. Away from the rink, Gambucci built a very successful insurance business, eventually serving as senior vice president and director of marketing for Acordia of Colorado.

He was inducted twice into the CC Athletics Hall of Fame — in 1998, as a member of the 1950 national champion hockey squad, and individually in 2004. He also is enshrined in the Colorado and Colorado Springs Sports Halls of Fame.