By Dave Reed and Jerry Cross ’91 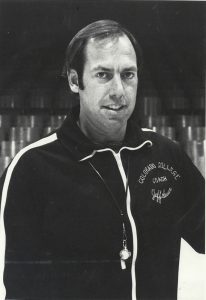 Jeff Sauer ’65, former hockey player and head coach at Colorado College, passed away on Thursday, Feb. 2, at the age of 73.

Sauer played hockey for three seasons at CC. After spending six seasons as an assistant coach with the Tigers and the University of Wisconsin, he served as CC’s head coach from 1971-82. He led Colorado College to its first NCAA tournament appearance in 21 years in 1978. After tying for fifth place during the regular season, the Tigers upset both Minnesota and Denver in the WCHA playoffs. Sauer compiled a record of 166-226-11 in his 11 seasons in Colorado Springs.

Following a brief stint as CC’s director of athletics, he was the head coach at Wisconsin from 1982-2002, leading the Badgers to the NCAA championship in 1983 and 1990.

“Jeff was a passionate hockey leader who dedicated his life to helping others learn and enjoy the game,” says Mike Bertsch ’73, who played for Sauer for two seasons, then replaced him as CC head coach in 1982. “He was a great Tiger, Badger, and Patriot of USA Hockey. He wore all of those colors with pride. He will be missed.”

Sauer was in his sixth season as the head coach of the U.S. National Sled Hockey Team at the time of his death. Since first taking the helm in 2011, Sauer guided Team USA to a 47-4-2-12 record that included winning the gold medal at the 2012 International Paralympic Committee Ice Sledge Hockey World Championship and the 2014 Paralympic Games
in Sochi, Russia.

“Coach Sauer will be dearly missed by all those who were fortunate to have known him,” says Dan Brennan ’86, director of inline and sled hockey for USA Hockey and general manager of the 2016-17 U.S. National Sled Hockey Team. “He was a great coach who always made hockey fun and he treated everyone in the game and in life as his equal. Our national sled hockey players loved him as did so many who were fortunate to play for him and coach at his side. Our great game has lost a genuine legend.”

Brennan played hockey at Colorado College from 1982-86, but never suited up for the man who recruited him.

“He recruited me my freshman year to CC and then left for Wisconsin,” Brennan says. “We always teased each other that he left to coach a national championship team, but now at USA Hockey I’m the GM of the Paralympic Sled Hockey Team and he’s the coach, so I got to boss him around.

“Jeff was the classiest person I have ever met and worked with in hockey!”

He is survived by his wife, Jamie ’65, and two children, Elizabeth ’02 and Chip.