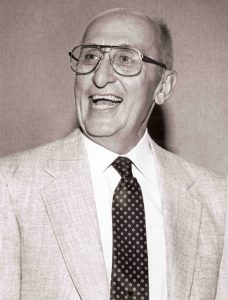 Ray Werner, professor emeritus of economics and a towering presence on campus for nearly four decades, passed away on March 17, surrounded by family in his Colorado Springs home. He was 95 years old.

At CC, Ray co-founded the international political economy major, chaired the Economics and Business Department, and was inducted into the Athletics Hall of Fame for his service on the Athletics Board. But he saw himself first and foremost as a teacher, one dedicated to the importance of clear thinking and writing and to the individual needs of his students. His awards include the Sidney G. Winter Award for Outstanding Teacher of Economics and Business Administration; the Chapman Fellowship for Research in Economics; the Louis T. Benezet Faculty Rotating Fellowship; the Lucile and David Packard Professorship; the Burlington Northern Foundation Faculty Achievement Award; and the Gresham Riley Award.

Ray was born in 1922, in Edgar, Nebraska, the son of German farmers. He earned a scholarship to Hastings College, where he graduated with a B.A. in economics. During World War II he served in the U.S. Army, where at Fort Leavenworth he taught illiterate recruits, most of them African American, Native American, and Latino, to read and write. The experience instilled in him an abiding belief in the potential of all people and shaped his later support of the Civil Rights Movement. In 1945, he earned the Bronze Star for his service as part of the Sixth Armored Division in Germany.

Following graduate study at the University of Nebraska and the University of Illinois, Ray and his wife, Donna Mae Hansen Werner, moved to Colorado Springs in 1948, when he accepted a position at CC. He pursued his Ph.D. during summers between academic years of full-time teaching, earning the degree in 1960 and becoming a full professor in 1964. Four years later, he was instrumental in launching the political economy major, now known as the international political economy major.

He also established writing as a crucial part of the economics curriculum at CC. “Even the most carefully thought-out essay or exam question received constructive comments written in Nebraska ‘Big Red’ ink,” remembers Bill Campbell ’67. “That feedback is why so many of us learned to write, not in a literature class but in economics.” The Ray O. Werner Professorship for Exemplary Teaching in the Liberal Arts serves as a tribute to his impact.

Ray coached debate on campus, and students continue to read and pass on “The Ethics of Controversy,” his guidelines for vigorous, respectful public debate. He also played a central role in the unanimous adoption of CC’s Block Plan (despite the fact that he had initially voted against the change), and was among the campus’ leaders in embracing computer technology until his retirement in 1987.

In the realm of athletics, Ray served as CC’s longtime faculty athletic representative. He helped establish the Western Collegiate Hockey Association, was a charter member of the WCHA Hall of Fame, and received the league’s Distinguished Service Award in 1986. He received the Joni Brandner Award for support of the CC hockey program and was inducted into the CC Sports Hall of Fame in 1997.

A firm believer in the connection between “town and gown,” Ray made impacts off campus as well. He helped establish the Master of Arts in Teaching program that facilitated returning veterans entering the teaching profession and later evolved into a key element of CC’s connection with schools throughout the state and region. He served as president of the Pikes Peak United Way and the local Chamber of Commerce, and also on the Goodwill Industries board, the Colorado Springs Utilities advisory board, and the city charter renewal commission in the mid- to late ’70s.