Paying It Backward: To CC Athletes, Sports Is Not Just a Game

“Soccer’s always been a thing in my life, since I was a little kid, so having the opportunity to keep that stoke alive …  for kids … it’s like getting back to my roots,” says Alexander Makic ’19. “[Soccer] got me here so I don’t see why not to give back.”

A physics major with an emphasis in environmental science, Makic plays center back on the men’s soccer team and is just one of the many athletes at CC who participates in the Department of Athletics’ community outreach and engagement programs. For men’s soccer, that means holding annual free soccer clinics for at-risk youth with the Southeast Springs Soccer Initiative.

Henry Schuler ’19, the men’s soccer captain, says, “The biggest impact … is being that example of what a young child’s life can turn into and what that next step can be and how that process can work. Because for kids in general, and specifically [these SeSSI] kids, I think the future is pretty unsure and can be … clouded in terms of how you get there and what it means to get there and, even, what that is.”

According to the National Collegiate Athletic Association’s website, “Giving back to the community is important to many NCAA student-athletes, whether involvement occurs on their own or within the team setting.” And that is indeed the case at CC. Jessica Bennett, CC’s director of athletics marketing, says, “I think the majority of our student athletes realize the importance [of being involved] and engaged in the community they’re living in. I think they realize that they can make an impact.”

“I find myself incredibly fortunate to work with such amazing student athletes,” she adds. “Their answer is always ‘yes.’ I do not have to beg anyone. I don’t have to search very far. I can send these opportunities to some student athletes and the answer is, ‘Yes, absolutely. When do you want me there? When can I go? When can I start?’”

The range of projects and nonprofits that the athletes support vary widely. Outreach includes the women’s basketball team’s involvement with the Ronald McDonald House, men’s basketball’s work with Operation TBI (traumatic brain injury) Freedom, and women’s soccer’s focus on the Special Olympics, to name a few. The CC Student Athlete Advisory Committee also hosts a fundraiser called Parents Night Out four times a year that offers local parents the opportunity to drop their kids off to spend an evening on campus with CC athletes playing sports and board games. 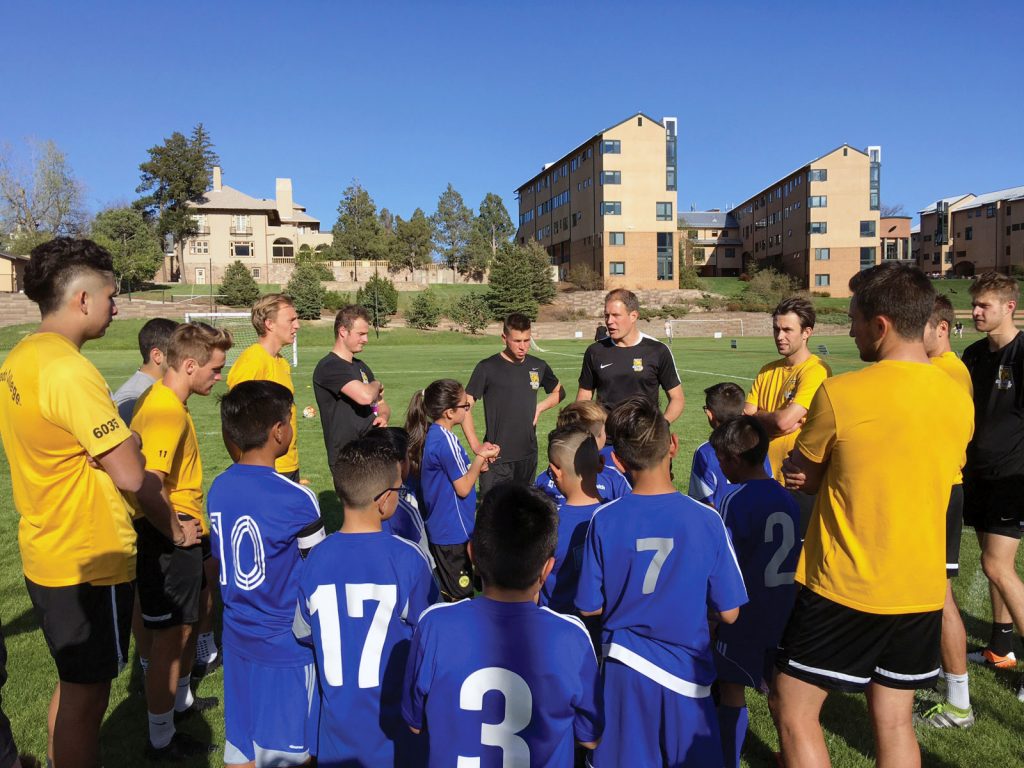 Quin Gattey ’19, a track & field hurdler majoring in international political economy, describes clinics his team hosts for local middle school students, saying the younger athletes come to campus for an afternoon when the CC practice is over, and the team sets up five or six stations. The students circulate around the stations and learn the basics.  “We usually have a high jump drill, a hurdle drill, and a plyometric drill for students to get some jumping practice in. There’s also a relay and a starting block drill,” he says.

“The most rewarding thing to see,” says Liza Huschle ’19, track and field member and co-chair of the Community Outreach Committee on the Student Athlete Advisory Committee, “is how much more comfortable the kids are at the end of their shift … compared to the beginning. The confidence they gain from mastering the skills we coach is evident in the way they carry themselves as they leave the station.

“Seeing their smiles and excitement about learning a new skill makes me excited for their potential athletic careers. That satisfaction and pride we get from mastering something new is unparalleled. And it’s so exciting to see someone experience that for the first time.”

The giving also takes place at the coach level. Scott Palguta, head men’s soccer coach, explains an upcoming opportunity with Keith Drury ’13. “Drury was a 4-year men’s soccer player and currently works for a really great organization — Soccer Without Borders — that uses soccer as a vehicle to address critical issues facing young people in underserved communities throughout the world. At the end of the academic year, our program plans to donate some of our used equipment to the SWB organization. We will also ask the players to donate any personal soccer gear they may not need anymore.”

Alex Nichols ’07, assistant coach of the cross country/track and field teams, says, “When I was a student at CC, I did volunteer work with the cross country team at Care and Share Food Bank. We sorted food donations and prepared deliveries. Most of the team was there participating and we created a competition to see who could sort and label the most cans of food.

It was a fun team activity that felt more like team building than service.”

These student athletes value the benefits of athletics that go beyond physical activity, such as goal setting, accountability, teamwork, leadership, problem-solving skills, and work ethic. They are comfortable acting
as role models for the local youth and see the rewards of passing these skills on.

Henry Baldwin ’19, a high jumper on the track and field team and an English major on the creative writing track, has seen the impact from the high-jump station at his team’s clinics. “There’ll be one kid who can jump pretty well. Then, all of a sudden, they’re hooked. You only have five minutes per station and they’re trying to get as many jumps in before they have to go to another station because it’s addicting.

“I also think it’s just good that, as a team, we’re making bonds within the community and we’re interacting with the people of the town that we live in all year.”