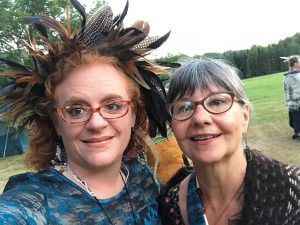 Joy Whitcomb ’97 and Linda Hart ’76 met at a women’s spirituality gathering near Seattle in July. They were enjoying a beautiful day by the Tahuya River at the Sahale Retreat Center when Linda, who now lives in Denver, mentioned that she gets down to Colorado Springs regularly and went to college here. Joy, who still lives in Colorado Springs, did a double take and asked “which college?” The two formed an almost immediate bond when they realized they were both special needs moms and Colorado College alumni. 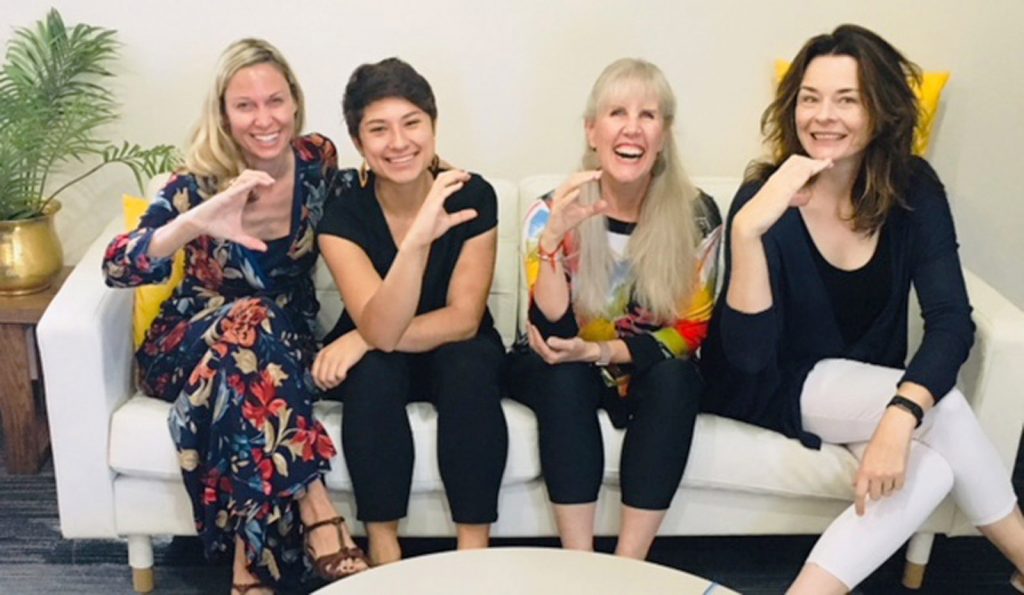 Melanie (Thielen) Ulle ’98, owner of Women in Kind, a  women’s co-working space in Denver, realized three CC alumni members were in the house on a sunny August  morning. Emilia Delgado-Heinz ’17, Amy Van Court ’83, and Bree Neely ’98 are all members of the co-working community in northeast Denver. Women in Kind focuses on women, their needs in business and in the business of life. 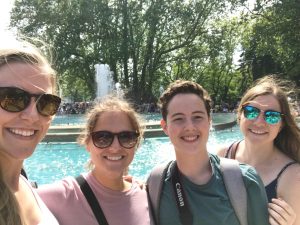 Emma Holmes ’15, Mary Bowman ’15, Christina Bowman ’17, and Cody Kornack ’14 happened to run into each other in the Munich airport, while at the gate waiting for a flight to Budapest, Hungary. Emma was traveling to Budapest to visit her younger brother who was there studying during the spring semester. Mary, Christina, and Cody were visiting Mary’s twin sister, who also was in school in Budapest. While in Budapest the four CC alumni met up on Margaret Island, a city park on the Danube River, where this photo was taken in front of the Margaret Island fountain.

Obletz ’77 and Bill Altman ’81 had a chance meeting while biking in Riccione, Italy, in late August. The two ran into each other during a bike-fitting at Europe’s premier biking hotel, The Belvedere. The Belvedere hosts cyclists from around the world and provides daily, guided bike tours of the countryside outside the beachside resort city of Riccione. They ended up doing four bike rides together, along with Doug’s wife Becky and a friend of Bill’s from law school and “had a total blast. We were the lonely Americans among a huge contingent of riders from Iceland,” says Doug. They can’t recall exactly how they made the CC connection, but “we did so within two minutes of meeting one another,” says Bill. Although they were at CC at the same time for a year, their classes and activities apparently did not overlap. However, Doug notes that “We’re getting so old, we could have been best friends and wouldn’t know it! 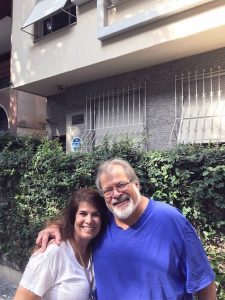 History Professor Peter Blasenheim visited alumna and close friend Celia Pereira da Silva ’88 during his Spring 2018 sabbatical. Celia teaches English in Rio de Janeiro and has recently started a real estate career. She keeps in close touch with her CC friends and enjoys showing them around Rio when they pass through. Peter also spent time with Jairo Valverde Bermúdez and Masaki Kawahara, both ’92 alumni, in Brasília, where Jairo has been Costa Rica’s ambassador to Brazil since 2014. Before that, Jairo spent several years in Cambodia and Mozambique under the auspices of the United Nations Development Program where, in his words, he worked on several projects designed to build democratic institutions and foster economic development in those two countries. 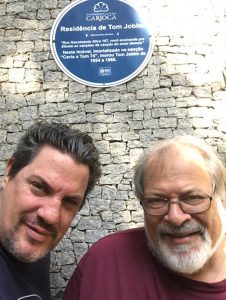 Peter returned from Brazil in March but scurried back to Rio in July to watch Christopher Dunn ’87, professor of Spanish, Portuguese, and Africana Studies at Tulane University, win the Brazilian Studies Association’s award for the year’s best book that “contribute[s] significantly to promoting an understanding of Brazil.” Peter derives much satisfaction and feels great pride that Chris wrote in the preface of his first book that his passion for Brazilian music began at a “pretty raucous party” at Peter’s house back in 1986 when Chris, a jazz buff since high school, first heard it. An interest in the history and culture of the country that inspired and created that music, and then more classes in Latin American history, a Watson Fellowship to Brazil, and a Ph.D. in Luso-Brazilian Studies all followed.