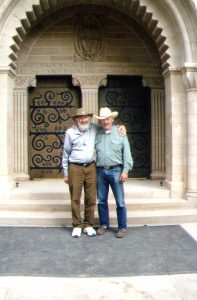 “In reading “Tigers Crossing Paths” in the Bulletin I thought you might be interested in my story. In 2008 I contacted three of my CC schoolmates on the 50th anniversary of our summer in Alaska prospecting for gold (1958). One of the three was able to go to Alaska with me, Maury Hammond ’56, to look at areas favorable for gold mining. I bought two claims and staked other acreage and in 2009 went to Alaska for the summer with crew and equipment; I was the geologist, Maury was the geological engineer. This past November, XII Caesars Gold LLC received the BLM 2017 Hardrock Mineral Small Operator Award, which recognizes achievement in reclamation. This is one of five categories of awards under the BLM’s Reclamation and Sustainable Mineral Development Awards Program. I went to the National Mining Convention in Washington, D.C. to accept the award. Unfortunately, Maury was unable to attend. It would have been even better for me to have had my old CC friend there who was so important in the initial phase of the mine and a dear friend.”— Ron Timroth ’54, M.A.’58 (Timroth received a Master of Arts from Colorado College in 1958, with a thesis titled “Geology and Petrology of the South Dome Plutome, South Park, Colorado.” His thesis is available at Tutt Library.) 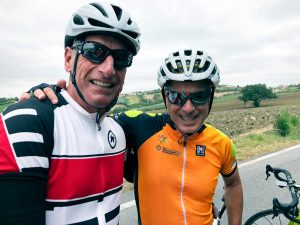 Doug Obletz ’77 and Bill Altman ’81 had a chance meeting while biking in Riccione, Italy, in late August. The two ran into each other during a bike-fitting at Europe’s premier biking hotel, The Belvedere. The Belvedere hosts cyclists from around the world and provides daily, guided bike tours of the countryside outside the beachside resort city of Riccione. They ended up doing four bike rides together, along with Doug’s wife Becky and a friend of Bill’s from law school and “had a total blast. We were the lonely Americans among a huge contingent of riders from Iceland,” says Doug. They can’t recall exactly how they made the CC connection, but “we did so within two minutes of meeting one another,” says Bill.

Although they were at CC at the same time for a year, their classes and activities apparently did not overlap. However, Doug notes that “We are getting so old, that we could have been best friends and wouldn’t know it!”

Editors’ Note — No, Doug and Bill didn’t meet up twice on cycling trips in Italy! Unfortunately, the photo did not accompany the item in the Winter 2018 issue of the Bulletin, so we’re running it again. 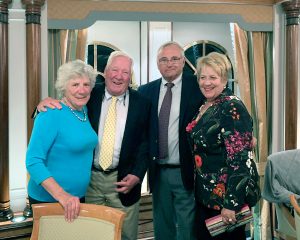 “Some CC alumni meet by coincidence on a remote mountain top. Not us. Jim ’69 and Mary ’70 Griffith shared an Italian golfing trip and Adriatic cruise aboard the Sea Cloud II with us by coincidence in October. The trip included a stop in Venice. Two weeks later, Venice was flooded.” — Doug ’62 and Nancy ’64 Norberg