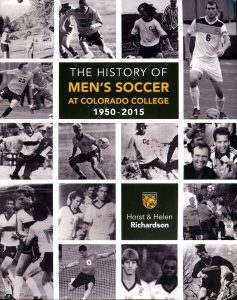 Horst Richardson coached men’s soccer at Colorado College for 50 years, with his wife Helen serving as the team’s surrogate mother, game-day chef, and documentarian from almost the very beginning.

So it is no surprise that in retirement, they hung in there for more than three years to complete “The History of Men’s Soccer at Colorado College, 1950-2015” (available through horstandhelenbooks.com).

Nor is it a surprise that the book reflects an even greater team effort. To gather the most vivid material, Horst connected with nearly 200 former players — representing every Tiger team, including Saad Sahawneh ’51’s original ragtag crew — plus dozens of friends of the program, parents, staff, and even referees. Routinely ceding paragraphs and pages to their memories, he and Helen (a former teacher and proofreader) create a joyful chronology that gives as much attention to road-trip bus breakdowns and player pranks as to corner kicks and NCAA trips. Nearly 100 photos, many of which came from locker room walls or Helen’s scrapbooks, add further color and energy.

The book, naturally, serves as a record of CC’s ascension to the upper tier of Division III programs. But his former German students wouldn’t be wrong if they accused Horst of having assembled a Liebesbrief — a love letter to soccer and the student-athlete, and to the school where he and Helen inimitably connected the two.