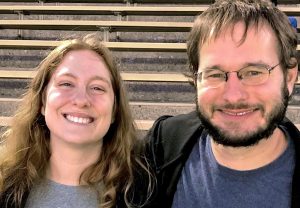 David Banks reports that during a very busy Homecoming weekend for the CC rugby family, highlights included one married couple (Caitlin Barbera ’12 and Andrew Larson ’10, above) and one father-son tandem (Mark Osmond ’78 and Alex Osmond ’12) playing as teammates. 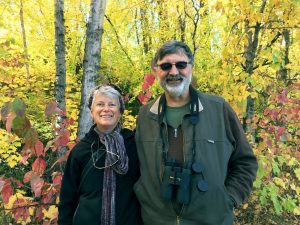 Patti Freudenburg and her husband, Tony, recently visited Steve Simasko at his mountain cabin in Jewel Lake, Idaho. Patti is retired, while Steve is a professor of integrative physiology and neuroscience at Washington State University. Though Steve and Patti hadn’t seen each other since graduation in 1977, Patti reports that their conversation about philosophy and world politics picked up as naturally as if they had never left Mathias Lounge. 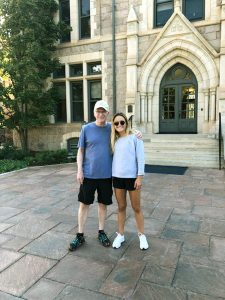 Tom Gallagher got to visit his niece, Grace Gittell ’21, during Family and Friends Weekend. He reports that his stay also included a great dinner with Professors Bob Lee and Ronald Capen.

Elizabeth Frank and Steve Achelis were married on June 16 in Jackson Hole, Wyoming, where they met when she took a year off from CC. Among those who celebrated their marriage at a Salt Lake City reception on Aug. 18 were Sally Claassen ’77 and husband, Mark Darlington ’77; Tom Miller ’78 and his wife Sasha Miller; Becky Lawton ’78; and Lauren Barros ’89 and her husband, Tom Moyer.

During a 40th class reunion bike ride, CC director of gift planning Stephany Marreel and others came to the aid of Jeff Kaes, who was experiencing uncharacteristic health issues on the trail. Multiple alumni with medical backgrounds stayed in touch in the following days and encouraged Jeff to complete medical tests — which led to a diagnosis of atrial fibrillation. Jeff reports he has since had a cardiac ablation procedure and a change of medication, and has resumed skiing and working out. Saying that the bike ride may have saved his life, he thanks his classmates and offers these words of advice to the Tiger community: “Go to your CC reunions. Don’t blow off your health symptoms. You’ll be a happier, better person for it. Go CC!” 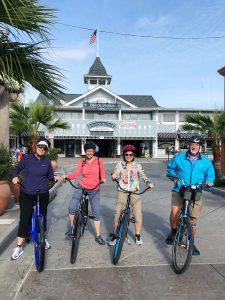 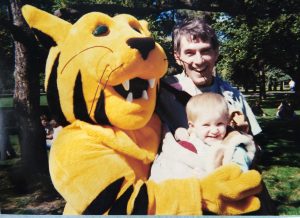 During move-in weekend last year, Harlan Simon and his daughter Ariela Simon ’22 re-created a memory. At CC’s 2000 Homecoming, when Ariela was 19 months old, father and daughter had their picture taken with Prowler; now 19 years old, Ariela allowed for an updated version.