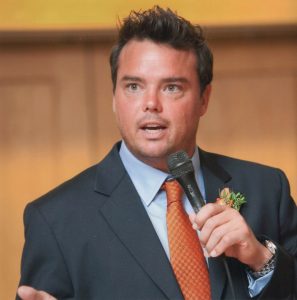 Nick Mystrom ’94 died unexpectedly on Sept. 25 at age 48. He was raised in Anchorage, Alaska, and graduated from Colorado College with a degree in economics. He was a standout athlete and the all-time leading scorer in CC football history. Nick went on to play professional football. After his playing career, he became a real estate developer and a passionate philanthropist. Shortly after completing his first successful real estate project, Nick loaded the back of his pickup truck with frozen turkeys and drove to a poor part of Denver. Standing in the back of his truck, he handed out turkeys for Thanksgiving to all who asked.

He started the Karma Club, whose goal is improving the world through acts of kindness. If you ever receive a Karma Coin that reads: “Pass it Forward. Do Good for Someone Else and Keep the Change,” you will have felt Nick’s impact. He also created, with the help of many friends, the annual Denver Derby Party, which has donated more than 30 full-ride scholarships to Colorado State University for high-achieving, economically disadvantaged Denver high school graduates. Nick was generous with family and friends, lived large, and was an inspiration to many. He is missed deeply by his family and friends.