As part of Building on Originality: The Campaign for Colorado College, a $435 million fundraising initiative, $100 million is being raised for scholarships. The Colorado Pledge hinges on raising $20 million of that total scholarship figure.

Susie Burghart ’77, chair of the Colorado College Board of Trustees, has initiated Susie B’s Challenge, a $2.5 million effort to help jump-start fundraising. Burghart announced in September that she would match gifts totaling $50,000 or more that were directed to the pledge.

Gifts made through the challenge will create endowment funds for scholarships for lower- and middle-income Colorado students and will be used to support CC students in perpetuity. The Colorado Pledge, and Burghart’s challenge that supports it, dovetail with Building on the Block, Colorado College’s strategic plan, which calls for enhancing CC’s distinctive place of learning.

“Our sense of place in the Rocky Mountain West factors prominently into the CC experience. As the only liberal arts college in the region, we need to ensure that Colorado College is financially accessible for students from Colorado,” says Burghart.

According to DonorBox, specific donor challenges are one of the best fundraising practices for universities.

“The benefit of allowing donors to see and donate to specific initiatives lies in their relatability. Some projects and programs will be easier for donors to relate to and will be closer to their hearts than others,” wrote Ilma Ibrisevic in a Jan. 6, 2019, article on the DonorBox website. 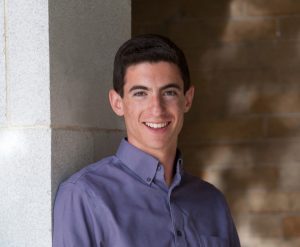 Ethan Greenberg ’20 is a Boettcher Scholar from Denver. He’s a political science major, president of the Colorado College Student Government Association, and an active participant in El Paso County justice-related programs. He believes the pledge can be key to keeping bright Colorado high school students in the state.

“The Boettcher Foundation, and the Boettcher Scholarship in particular, was instrumental in keeping my focus pointed toward Colorado. It really put CC front and center for me,” says Greenberg.

He sees the Colorado Pledge as not only a way for young people to stay in the state for their college years similar to the way Boettcher opened that path for him, but also potentially for their careers.

“In the next few years post-graduation, I see myself tied to the state and tied to this college because of a sense of place. I’ll remain close because, in part, I went here. And that matters,” he says.

To participate in Susie B’s Challenge for the Colorado Pledge, contact Meghan Yingling at (719) 389-6741 or myingling@coloradocollege.edu.