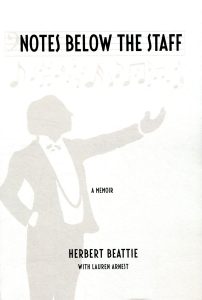 Notes Below the Staff

By Herb Beattie ’48 with Lauren Arnest

“Not many people can begin an anecdote like this: ‘Beverly Sills was sitting next to me on a flight from New York to Pittsburgh…’,” and so begins the forward by Dave Mason ’78 to Beattie’s memoir, published by Rhyolite Press, 2019.

Beattie was one of the driving forces behind the founding of the Colorado Opera Festival, along with Donald Jenkins, opera director at Colorado College, and J. Julius Baird, founder and artistic director of the Colorado Springs Opera. Beattie, a preeminent bass who worked with many of the great operatic stars of the 20th and 21st centuries, often doubled as a festival performer and teacher, as did stage director/choreographer Hanya Holm, and set and costume designer Klaus Holm.

Beattie, a traveling opera singer, sang in the most celebrated opera houses in the world to school gyms and Alaskan fishing villages. He recalls singing in Central City, Colorado, and driving the 1,500 miles from Long Island with his wife and five children, mortifying his oldest daughter, then 13, as he practiced his scales while stopped at a red light in a small town in Nebraska — next to a convertible full of teenage boys.

His memoir is filled with numerous photos, backstage stories, and amusing accounts of working with both the famous and obscure in the world of opera. The most important article of clothing for an opera singer? Comfortable shoes. Best food? A private chef in Tel Aviv and a certain trattoria in Rome. Favorite role? Osmin in Mozart’s “Abduction from the Seraglio.” Least favorite? The Bonz in Puccini’s “Madame Butterfly” — in part because of the shoes. 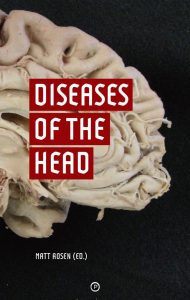 Diseases of the Head

This anthology features essays from contemporary philosophers, artists, and writers working at the crossroads of speculative philosophy and speculative horror. A compendium of multi-vocal endeavors and a travelogue of philosophical exploration, the collection centers on the place at which philosophy and horror meet. Employing rigorous analysis, insightful experimentation, and novel invention, this anthology asks about the use that speculation can make of horror and horror of speculation, about whether philosophy is fictional or fiction philosophical, and about the relationship between horror, the demands of our world and time, and future developments that may await us in philosophy. Published by punctumbooks, 2020. 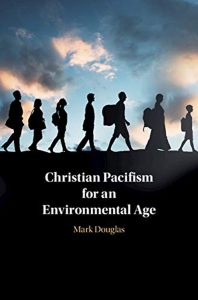 Christian Pacifism for an Environmental Age

Douglas, a professor of Christian ethics at Columbia Theological Seminary, offers a new vision of the history of Christian pacifism within the context of a warming world. He narrates this story in a way that recognizes the complexities of the tradition and aligns it with a coherent theological vision, one that shapes the tradition to encompass the new causes and types of wars fought during the Anthropocene. Along the way, Douglas draws from research in historical climatology to recover the overlooked role that climate changes have played in shaping the Christian pacifist tradition and the movement of traditions through Western history. Published by Cambridge University Press, 2019. 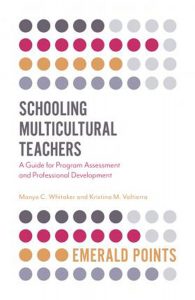 Whitaker and Valtierra write that the cultural identities of teachers inevitably influence the interactions they have with their students. These relationships, in turn, impact teaching and learning processes, with many low-income, racial, ethnic, and linguistic minority students failing to receive the same quality of education as their more privileged counterparts. The book offers guidance for enhancing teachers’ inclusive instructional practices by using the Dispositions for Culturally Responsive Pedagogy Scale (DCRPS). Developed by the two CC education professors, this is the only validated scale that measures the diversity-related beliefs, values, and attitudes that underpin multicultural teaching practices. Published by Emerald Publishing, 2019. 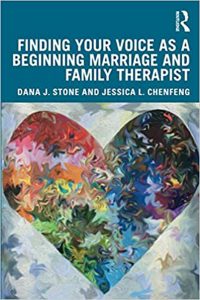 Finding Your Voice as a Beginning Marriage and Family Therapist

Stone, associate professor in the Department of Educational Psychology and Counseling at California State University Northridge, provides support to early career marriage and family therapists in this book. The authors address a lack of resources for therapists during early professional development, particularly for those who have traditionally been marginalized because of their identity and who seek authentic and meaningful connections with themselves, their colleagues, and clients. The authors offer insights on the literature of clinical training as well as stories from early career and seasoned marriage and family therapists. There are exercises and practical skills for active engagement in one’s own development. Published by Routledge, 2020. 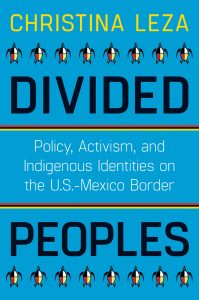 The border region of the Sonoran Desert, which spans southern Arizona in the United States and northern Sonora, Mexico, has attracted national and international attention. But what is less discussed in national discourses is the impact of current border policies on the Native peoples of the region. Leza’s book does just that. She addresses the impact border policies have on traditional lands and the peoples who live there — whether environmental degradation, border patrol harassment, or the disruption of traditional ceremonies and shows how such policies affect the traditional cultural survival of Indigenous peoples along the border. Published by University of Arizona Press, 2019. 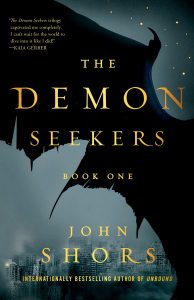 The Demon Seekers: Book One

Internationally best-selling Shors, whose seven previous novels have been translated into 25 languages, has switched genres. Known for his Asian-themed works of historical fiction, Shors has released an epic, young adult science fiction trilogy. It’s 2171 and a century since hostile aliens turned Earth into a prison for the worst of their own kind, nearly wiping out humanity in the process. Seventeen-year-old Tasia is a Seeker — a human survivor who hunts down the cruel creatures that conquered and destroyed her world. When Tasia’s brother becomes ill and her family is ripped apart, she must leave all she knows in an attempt to save him. Published by Blackfin Books, 2019 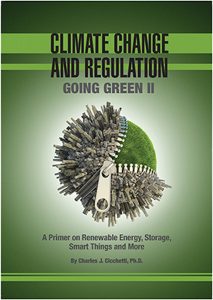 Cicchetti, who has taught energy and environmental economics for nearly 50 years at the University of Wisconsin, Harvard University, and the University of Southern California, scrutinizes the challenges energy utility regulators face. He examines an array of industry-related questions, and notes the most daunting hurdle for regulators is how they will accommodate what policy insiders from both political parties predict are inevitable carbon fees that likely will increase rapidly. The new fees affect utility choices, sharply increasing utility bills, and regulators, utilities, their customers, and competitors need to respond. This book is a sequel to Cicchetti’s 2009 book on energy efficiency. Published by Public Utilities Reports, 2019. 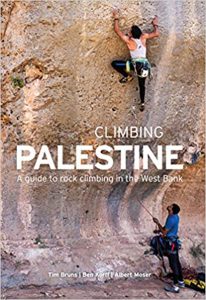 Climbing Palestine: A Guidebook to Rock Climbing in the West Bank

Rock climbing is probably the last thing that comes to mind when most people think of the Palestinian territories. Bruns’ is the first comprehensive guidebook to rock climbing in the West Bank, detailing more than 300 climbing routes in nine different areas. The book also describes how to travel to and within the region, where to stay, what to do on rest days, and where to eat the best local food. Chapters include detailed information on the history and access information for each cliff and routes are accompanied by short descriptions, the difficulty rating, and information on the required gear. Published by Climbing Palestine, 2019.