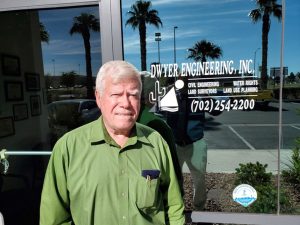 David Dwyer recently retired from civil engineering after 45 years in the profession and 25 years as principal of Dwyer Engineering in Las Vegas, Nevada. David earned his engineering degree from Columbia University in New York City in 1974. He returned to Colorado Springs and worked in the construction field for a short time. In 1977, he married Vickie Schneider from Greeley, Colorado, and moved to Fairbanks, Alaska, to work on the Alaska pipeline. After the pipeline was completed, he worked for a Corps of Engineers flood control dam and, finally, for the City of Fairbanks. They stayed in Fairbanks for 10 years and had three children, Phillip, Margerethe, and Richard.

Moving to Las Vegas, Nevada, in 1987, David worked several years in the public sector. In 1994, he founded Dwyer Engineering, designing residential, commercial, and industrial subdivisions. The company was sold internally with his son, Phillip, as a surveyor. Margerethe runs a food truck business in Oklahoma City and Richard is a major in the Army, currently stationed in Okinawa, Japan. David and Vickie have five grandchildren and are spending retirement traveling, working with high school youth programs, and learning that every day is a Saturday.

Former CC hockey coach Scott Owens announced his retirement on March 25 from the United States Hockey League’s Sioux Falls Stampede.  He coached CC through 15 seasons and achieved a school record of 324 game wins. He also led the team to the NCAA tournament seven times, won the WCHA title three times and had a showing at the 2005 NCAA Frozen Four appearance.

Ross Barnhart was selected as the “Citizen of the Year” by the Pueblo County Sheriff Department in January. This honor recognized his efforts in raising scholarship funds for the Pueblo Community College through 15 years of yard sales and book sales. He also regularly gave used books to the inmates at the jail, including 150 cases this past year alone.

Markus Hartmann has been appointed vice president and general counsel for the Carrols Restaurant Group effective Feb. 18. Previous to this post, Markus was the vice president for technical compliance at Mercedes-Benz Research & Development North America, Inc. and has practiced both domestic and international law for public and private companies. Markus also flew CH-46 helicopters in Operation Desert Shield/Storm and retired from the Marine Corps Reserve in 2014 as a colonel.

Dr. Anne Basting, MacArthur Fellow, Ashoka Fellow, founder and president of timeslips.org, and professor of theatre at the University of Wisconsin Milwaukee, released free resources from her nonprofit, TimeSlips Creative Storytelling. The resources help family members and caregivers “engage creatively with seniors” during social isolation. The materials include a series of “Beautiful Questions” to enhance well-check conversations with loved ones who can’t receive visitors and creative prompts for projects to take place either in a senior’s room or to paint window murals from inside of a care facility. TimeSlips also offers a postcards project with a list of addresses for more than 80 nursing homes and care centers around the world whose residents would like to receive postcards. Anne also was recognized as one of CC’s past Faces of Innovation.

In early April, Gov. Gavin Newsom named Paul Markovich, president and CEO of Blue Shield of California, co-leader of the task force in California to cut the COVID-19 testing backlog. His co-leader is Dr. Charity Dean, assistant director at California’s public health department. The task force was tapped to “work toward a fivefold increase in daily testing in the state by identifying supply shortages and adding testing locations.”

Toby Johnson and Amy Johnson ’93 of Collins Ranch in Kit Carson, Colorado, were awarded the Colorado Leopold Conservation Award for their cattle grazing system focused on grass and soil health and their efforts to improve wildlife habitat and water quality. Toby and Amy will receive a $10,000 prize for their accomplishments as land stewards.

Kevin Cady wrote three self-published novels called “The Warren Files” trilogy. Kevin graduated with a master’s in education from CC and is currently a high school English teacher with Atlas Preparatory Charter School in Colorado Springs. The books, “A Solitary Awakening,” “Crooked Principles,” and “Truth’s Illusion,” are receiving praise as a dark mystery trilogy for Kevin’s “nuanced prose [that] scintillates and intrigues from beginning to end … and penetrates the darkest crevices of the imagination.” To learn more about Kevin and his novels, you can visit kevincadyauthor.com. 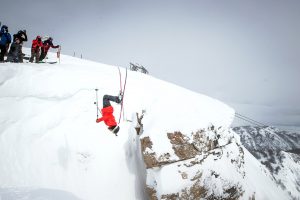 Veronica Paulsen successfully backflipped into Corbet’s Couloir during the third annual “Kings and Queens of Corbet’s” extreme skiing competition in Jackson, Wyoming. It was her third attempt and she is the first woman to ever accomplish this incredibly difficult feat.