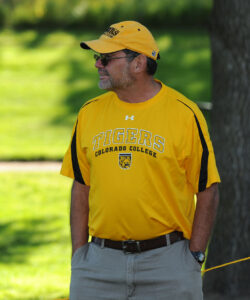 The longest-tenured coach at Colorado College has called it a career. Head cross country and track and field coach Ted Castaneda announced his retirement, effective Dec. 15, 2020.

“This has been a dream job for me, but it must come to an end sometime,” Castaneda says. “My tenure at CC has been a wonderful opportunity full of ups and downs, personal growth, challenges, sports growth, and exciting improvements that I have observed for our programs.”

During the fall of 2019, Castaneda led both teams to the SCAC title at the conference meet in Widefield, Colorado. For his efforts, he was named the SCAC Coach of the Year for both the men’s and women’s cross country seasons, his seventh time earning the men’s honor and fourth as women’s.

He has coached athletes to a total of 40 outdoor track men’s and women’s school records during his tenure. In indoor track, his female athletes reset all 26 records and the men broke 15 before winter competition was discontinued in 2002. In addition, 23 cross country and track athletes have earned All-America honors, including 1998 NCAA heptathlete champion Heather O’Brien ’99, five-time recipient Julian Boggs ’08 (three times in cross country and twice in track and field), and standout Jackson Brainerd ’12, who led CC to its third consecutive SCAC cross country team championship in 2011.

“It is hard to capture Ted’s impact and legacy here at Colorado College,” CC Vice President and Director of Athletics Lesley Irvine says. “He is a true ambassador for the sports he has coached for so long. We thank Ted for his dedication and leadership over the years and wish him the best in his well-earned retirement. To see both teams win conference championships last season on our home course was a special moment for us all to share with him.”

Assistant coach Alex Nichols ’08 has been named interim head coach for cross country and track and field through the remainder of the academic year. Nichols, who earned All-America honors in cross country as a senior under Castaneda’s tutelage at CC, returned to his alma mater as assistant coach for both sports in 2012.