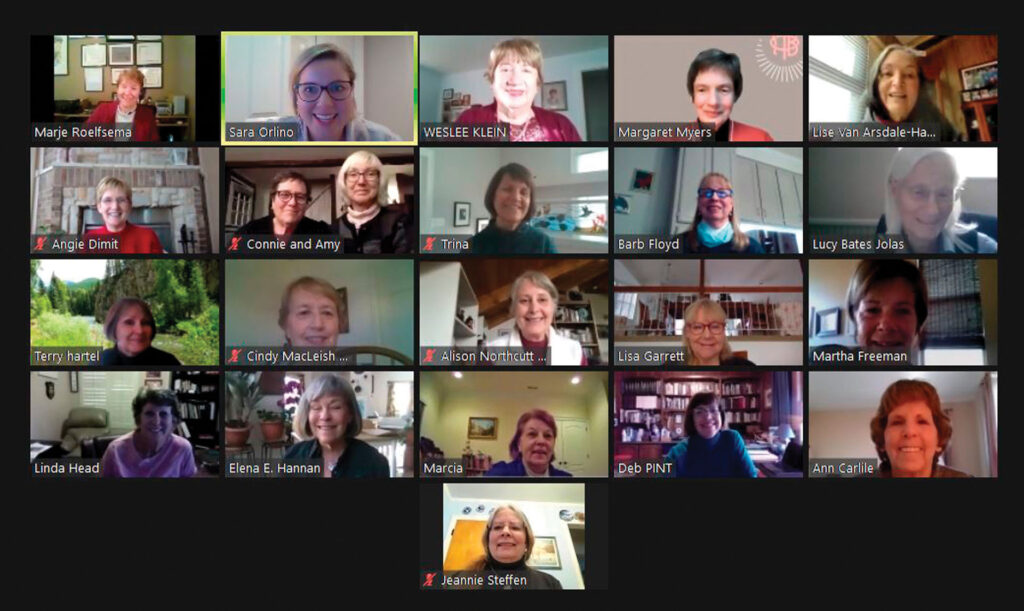 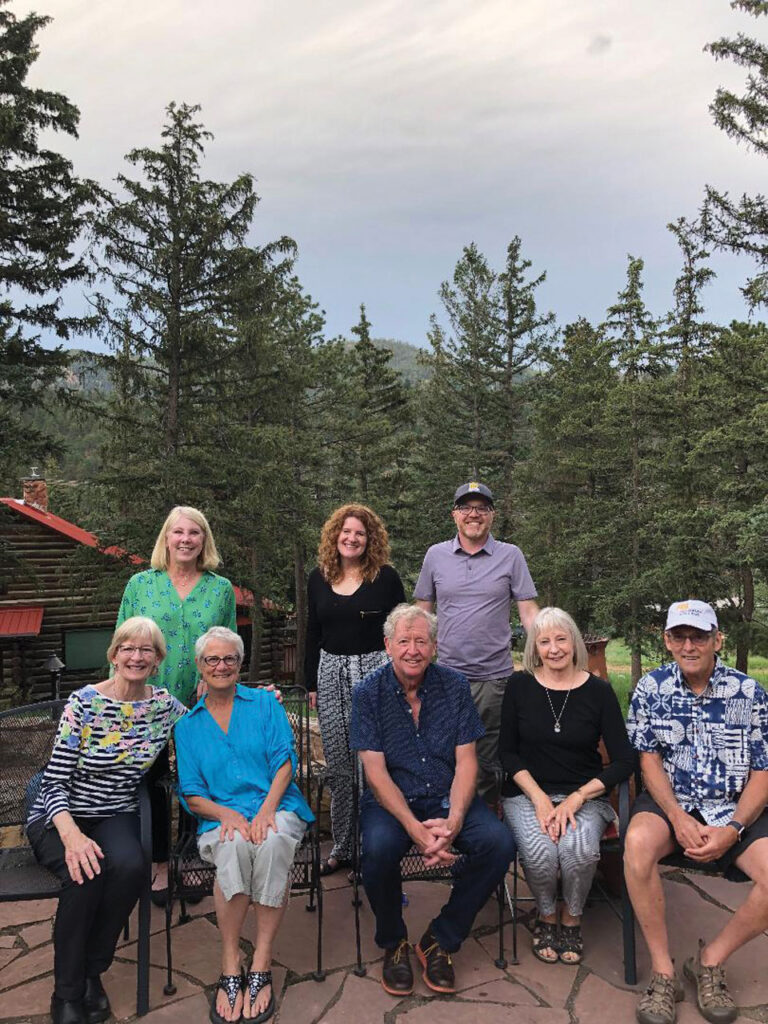 Lynn Morris has been inducted into the Bluegrass Music Hall of Fame after being honored Sept. 30, 2021, at the annual International Bluegrass Music Association Awards Ceremony in Raleigh, North Carolina. Lynn, a banjo virtuoso, is the first person to twice win the coveted National Banjo Championship in Winfield, Kansas. She began performing in the United States, Canada, and Europe after earning an art degree from CC. She was the first woman elected to the IBMA board of directors, has been named IBMA Female Vocalist of the Year three times, and Traditional Female Vocalist for the Society for Preservation of Bluegrass Music in America seven times. 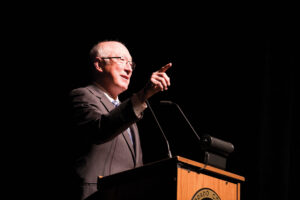 During Family and Friends Weekend in 2006, Ken Salazar ’77 spoke to a packed house at Kathryn Mohrman Theatre on the CC. Photo by Jennifer Coombes

Ken Salazar was confirmed as U.S. ambassador to Mexico on Aug. 11, 2021, and assumed his duties Sept. 2. Ken earned a bachelor of arts in political science from CC and a juris doctor from the University of Michigan, and received an honorary doctor of humane letters degree from CC in 1993.

Ken was born and raised in Colorado’s San Luis Valley, where four previous generations of his family were ranchers. After earning his J.D., he became chief legal counsel for Roy Romer, then Colorado governor, in 1986. Four years later, Ken was appointed as director of the Colorado Department of Natural Resources. There, he wrote the Great Outdoors Colorado Amendment and created the Youth in Natural Resources program, both of which continue to support the health and future of Colorado’s environment.

Ken was the first Latino elected to Colorado statewide office when he was elected attorney general in 1998. He served until 2005, when he was elected a U.S. senator. He was the secretary of the interior from 2009 to 2013; one primary focus was to ensure that national parks and national monuments were inclusive of the country’s indigenous and minority communities.

In between these accomplishments, Ken has been in private practice, most recently as a partner in the WilmerHale law firm, representing clients in energy, environment, natural resources, and Native American matters.

Ken was on the CC Board of Trustees as a volunteer for nine years and has been an honorary member of the board for 17 years. 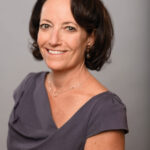 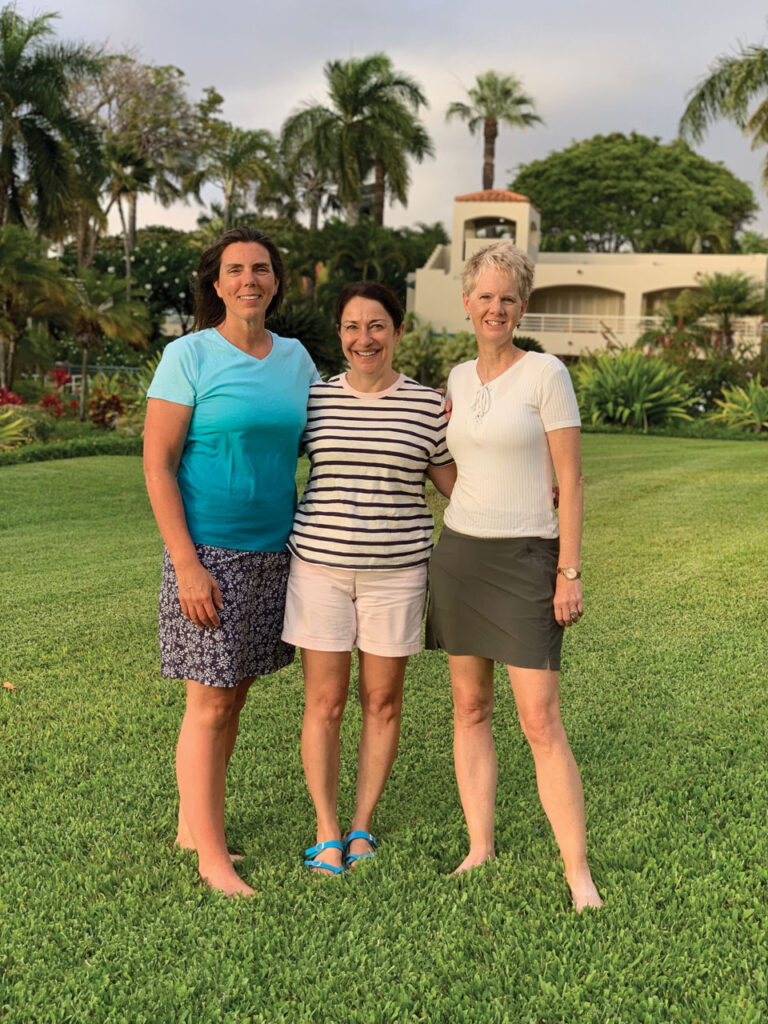 Three classmates gathered in Maui, Hawaii, in the summer of 2021 after a long separation during the Coronavirus pandemic. From left: Katy McNitt Jensen, Maryrose Kohan, and Kimberly Race.

Antonio Aiello was selected as a 2020 Sundance fellow in episodic TV, along with his collaborator, Mansoor Adayfi, for their television show, “From Guantánamo, with Love.” It was based on “Don’t Forget Us Here, Lost and Found at Guantánamo,” the book they co-wrote. Antonio is content director for PEN America, where he helps give voice to issues of social justice and writers in peril around the world.

Colorado Gov. Jared Polis appointed Eric Kuhn to the Colorado Court of Appeals, effective July 7, 2021. Eric earned his J.D. from the University of Denver Sturm College of Law in 2006. He is a senior assistant attorney general for the state, and has served in the Health Care Unit (2010-2015 and 2017-present) and the Public Officials Unit (2015-2017). Previously, Eric was an associate attorney at the Law Offices of Bradley J. Frigon.

Ian Miller was named chief scientist and innovation officer at the National Geographic Society in July 2021. Previously, he was director of the Earth and Space Sciences at the Denver Museum of Nature & Science. He earned a bachelor of arts in geology from CC, a master’s in geology from Yale, and a doctorate in geology and geophysics, also from Yale. At the NGS, Ian will ensure that science continues to be foundational to the organization’s programs. 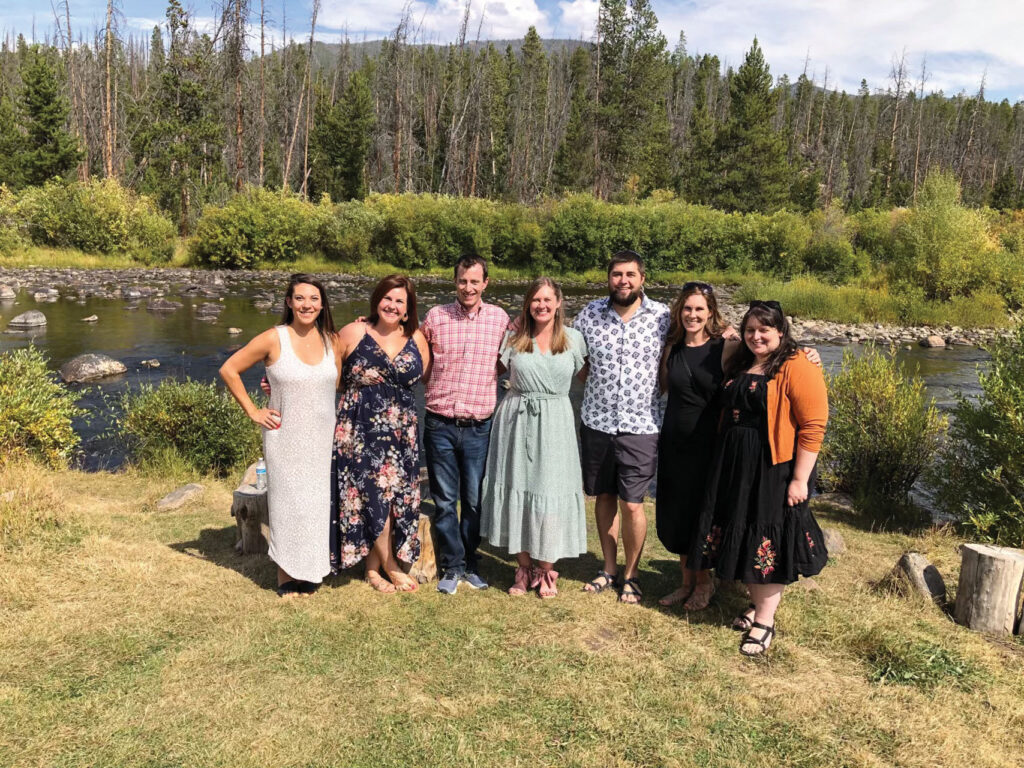 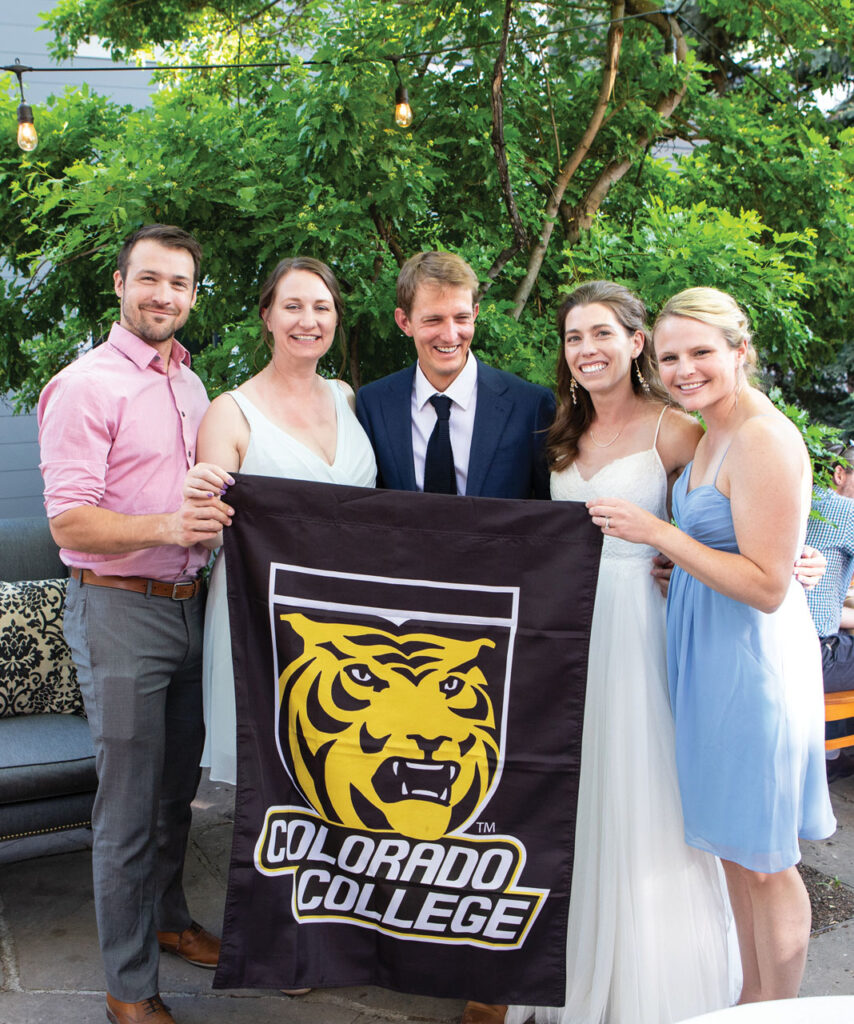 Sarah Wolff and Treye Denton married in a small ceremony in Colorado in June 2021. From left: Brendan Ross, Emily Beans Ross, Treye and Sarah, and Jessica Kautz Swearingen, all Class of 2010. 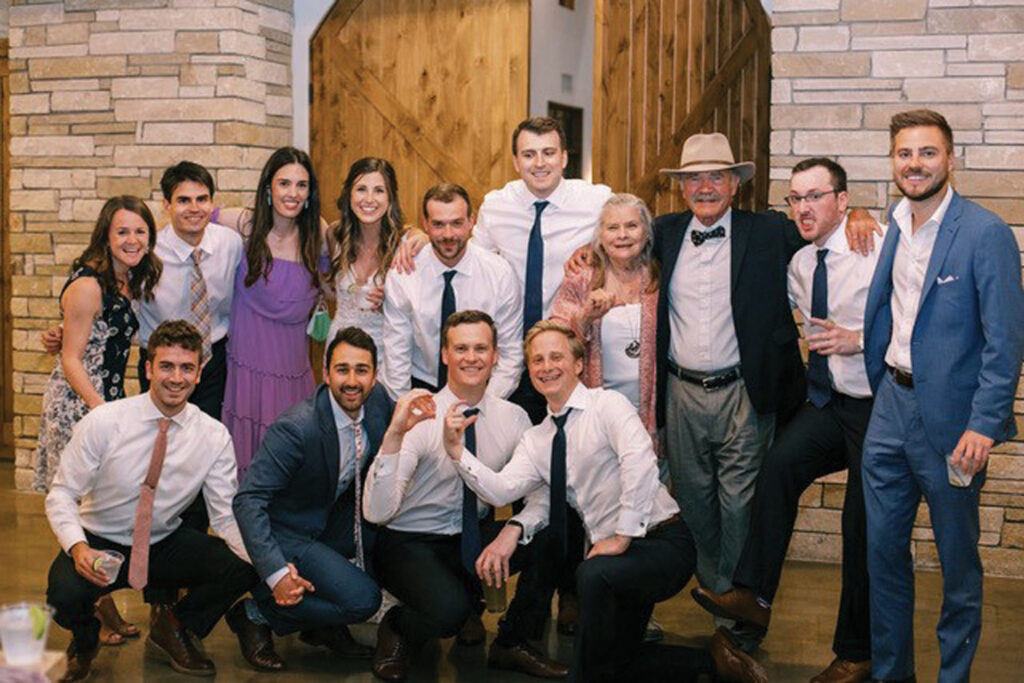 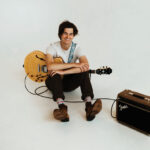 Teddy Weeks released his debut album, “Satisfy Me,” in July 2021. He studied physics and music in college, then wrote songs for Top 10 singers including Shawn Mendes. Teddy spent three years working on the album, striving to create something that was “all substance with very little fat” — a goal he learned at CC. To listen, go to soundcloud.com and search for his name.

Madi Johnston Doerre earned a master’s degree in sport management from Texas A&M University in May 2021. While attending CC, Madi played on the women’s tennis team, worked in the Fitness Center, and volunteered while supporting CC athletics. Madi continues with her love of sport, now working for the United States Olympic Committee’s Diversity and Inclusion Department in Colorado Springs.

Megan Koch, a member of CC’s cross-country and track and field teams, has been appointed to the National Collegiate Athletics Association’s NCAA Constitution Committee. The committee’s mission is to identify the core principles that define college sports and propose a new governance model that will allow quicker changes without sacrificing broader values. Megan, the Southern Collegiate Athletic Conference representative on the national Student-Athlete Advisory Committee, is one of three student-athletes on the Constitution Committee and the only one from Division III. 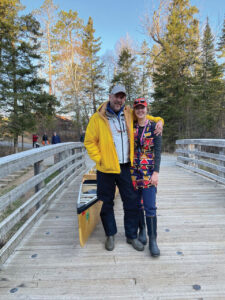 Casey Millhone has blazed a trail on the Mississippi River by paddling its length in 17 days, 19 hours, and 46 minutes in April-May 2021. Accompanied by her father, Kirk, and their teammates Rod Price and Bobby Johnson, Casey is the Guinness world record holder for being the youngest person to accomplish the feat. She and Kirk are also the only father/daughter team to hold the record. Casey prepared for the undertaking on her paddle machine, set up behind the benches in the Honnen Ice Arena.