Many walk by the once-vibrant, 200-foot long monument to Chicano/a/x muralism without noticing it. Some who do only stop to remark on how it’s seen better days. Fewer still know the mural’s actually part of the collection of the Colorado Springs Fine Arts Center at Colorado College. It’d be hard to blame them. 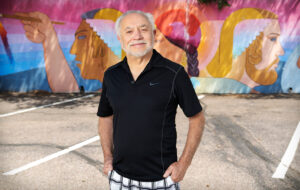 “Arte Mestiza” was painted by Emanuel Martinez, a towering figure in the art form, and Chicano/a/x community members in the 1980s. It was donated to the museum by the Hispanic Arts Council, as a gift from the community.

“The content of the mural is very significant to our culture, our heritage, our people,” Martinez says. “It tells a story about our contributions to the arts.”

But in the over three decades that it’s haunted the parking lot of the FAC, the acrylic epic has been left to pollution and the elements with little to no care, Martinez says.

“Frankly, I don’t know of any care that they have done … in the last 35 years or so — not even so much as pressure washing it,” he said. “It’s a shame for an institution … to be so negligent of one of their — I think it’s a collection piece, maybe they still don’t see (it) that way, but that’s the way they accepted it.”

Michael Christiano, who joined the FAC as director of visual arts and museum in Fall 2021, says that as a public, outdoor work of art, “Arte Mestiza” requires a “different level of care.” Nevertheless, he says the mural is a “critical work of art for the collection.”

“This is a project that’s been too long neglected, and it’s very much a priority for us,” he says. “I can’t really speak to what happened prior, but my understanding is that there was not sufficient attention paid to the upkeep of this mural, and that’s not acceptable practice for us going forward at all.”

Christiano says the museum is looking into getting a conservator to assess it and come up with recommendations for better protection, like metal flashing for weatherproofing, better drainage, and guards to keep people from parking too close or from snow being piled up against the wall.

That’d be the first step in a multi-year conservation effort that would eventually bring Martinez back for “community-driven restoration,” he says. That effort would partly be paid for with the FAC’s operating budget, possibly alongside grants the FAC is pursuing to help fund the cause.

A conservator hasn’t been found yet, Christiano says, but the FAC hopes to get that phase done this fall.

“Arte Mestiza’s” decline is emblematic of a larger picture, one of a dwindling number of Chicano/a/x murals because of neglect and erasure, says Martinez’s daughter, Chicano/a/x Murals of Colorado Project Director Lucha Martinez de Luna.

“It’s very representative of overall how … (Chicano/a/x) murals have been disregarded and not considered of any type of cultural or artistic value,” she says.

But recently, Chicano/a/x murals have gotten some of the attention they need.

In May, the National Trust for Historic Preservation recognized Colorado’s Chicano/a/x murals on its annual list of America’s 11 most endangered historic places.

Martinez de Luna says that’ll bring both the awareness she’s fought a years-long fight for and the possibility of grants to protect the murals. 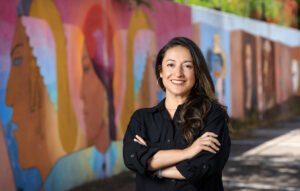 Nancy Rios works in collaboration with Chicano/a/x Murals of Colorado Project, the FAC, and the artist to restore and conserve the mural on Aug. 9, 2022. Photo by Lonnie Timmons III

It was the first time murals have been on the list, CMCP Education Director Nancy Ríos says.

Ríos is also program director of CC’s Mobile Arts Program and has taught courses at the college over the years. As a Hulbert-Mellon Faculty Scholar she began researching “Arte Mestiza” in 2019. She said the FAC’s talked about taking care of the mural, but it’s pulled in many directions.

“It just doesn’t get the concerted effort it really needs,” she says.

Martinez, who says he’s frustrated despite the promises, thinks the work just needs to move faster.

“There should be some urgency here — do it while I’m alive … in a few months, I’m going to be 75 years old. I’m not going to paint murals all my life,” he says. “What it might involve is just us doing it ourselves … that may be the last resort, and the only way it’s going to get done.”