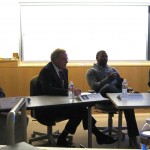 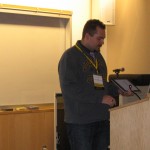 The Education Department hosted a panel on Friday, October 12 as part of Homecoming Weekend. The discussion topic was “Issues Facing Teachers Under High Stakes Testing.” Click on each photo for full display.

Education Department Chair Mike Taber was the host and moderator.

Victor Fitzjarrald began the session by cross-referencing data from two different studies. The resulting chart contrasted the relatively low test scores of U.S. students as with the high, second place international ranking of U.S. students in entrepreneurial ability. The SB191 educator effectiveness bill created high stakes for teachers to teach well, without stipulating equally high stakes for students to study well.  The YouTube video “Medieval helpdesk with English subtitles” provided great levity to the question “Is technology the answer?” to benchmarking and improving academic performance. Fitzjarrald also referenced Sir Ken Robinson’s work on reforming education to encourage for student creativity. Data from the MetLife study on integrated reform indicates that the average teacher has one year of service; at any given time, one in three teachers want to be somewhere else; one in five want to leave the profession altogether.

Tony Rosendo provided background to the at-risk student population at his school. He commented on the lack of alignment between K-12 and higher ed. standards in Colorado, and the absence of backward mechanisms to triangulate standards back to the 5th grade from the ACT. Regardless of how he and his staff feel about standardized testing, their goal is still to prepare their students to take the test.

Dr. Gledich provided insight to the realities of day-to-day implementation of measures related to SB191 and SB 163, the Educational Accountability Act. While other states readily provide testing items on their websites, testing items in Colorado are unknown.

Mike Taber noted that 60% of the graduates from CC’s Master of Arts in Teaching program are still teaching after five years and that 13% are entering their sixth year. Those who do take a break from teaching often do so to start a family, subsequently returning to the teaching profession.