The increasing amount of media presence in humans’ lives has changed the public’s emphasis on environmental protection. People tend to overlook the local news and rely on the information presented by national media. Looking at the process of releasing information regarding the Waste Isolation Pilot Plant (WIPP), the only geologic repository for nuclear waste in the United States 26 miles east of Carlsbad, New Mexico, many strategies of local and national news sources were used. Both attempt to provide the public with accurate and important information, but the efforts and effectiveness of local news have a greater impact and role in the field of environmental justice.

In the emergence of environmental preservation, large environmental groups have outshined local environmental groups using national media to their advantage. Large environmental groups use repeated strategies to garner donors and members who donate passively, making their contributions to society less about hands-on work and more about satisfying their charitable behavior (Rydin and Pennington 2000). Stemming from this is an issue among many large publications: focusing on the causes most people are concerned about while ignoring the causes that will create the most benefit to people, especially from poor, minority areas. Local news, however, caters their publications to the members of the local communities, reinforcing the idea that “the major burden of [environmental] work has and will continue to be on regional, state, local, and grassroots organizations.” (Abernathy 1991).

After World War II and the ensuing Cold War, U.S. government laboratories had a significant amount of nuclear waste to dispose. Along with several other nuclear disposal sites, WIPP was created to specifically store Transuranic (TRU) waste (Waste Isolation Pilot Plant). Coincidentally (or not), WIPP was constructed in Eddy County close to the border of Lea County in Southeast New Mexico with a combined population consisting of 49.8% people of Hispanic heritage and 14.9% struggling in poverty (New Mexico Demographics).

After 15 years of successful storage, two isolated, unrelated accidents occurred. First, on February 5th, 2014, a salt haul truck caught fire in the northern part of the mine. All workers were evacuated and only 6 employees experienced smoke inhalation. 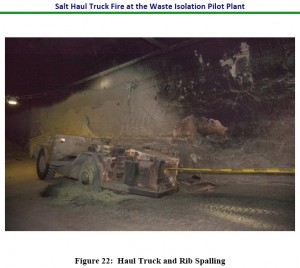 Then, on February 14th, a continuous air monitor (CAM) alarmed in the middle of the night. It was determined afterwards that a barrel of cat litter, a great absorber of nuclear waste, exploded (Brumfiel 2014). Small amounts of contaminated air escaped outside of the facilities and several employees tested positive the next day of work to small, non-dangerous levels of contamination from the incident (U.S. Department of Energy).

The DOE claimed that there was no contamination on equipment, personnel, or facilities. However, scientists from the Carlsbad Environmental Monitoring and Research Center (CEMRC) reported WIPP radioactive contamination 0.6 miles away from the exhaust shaft. Although the amount detected was below public or environmental concern, it still falsifies the DOE’s claim that the contamination was contained properly (Hardy 2014). It was only after these local publications caught wind of what was going on that larger, national news outlets started to care about the happenings at WIPP.

Why is this Relevant to Environmental Justice?

Had the CEMRC results not been published to the public by local news sources, the likelihood of local community interaction might not have existed. Additionally, the many issues with WIPP and the DOE would not have been fixed, so the operations potentially would still be operated by the short-cut, money driven employers previously in charge (Ponce, 2014). This fits into the environmental justice framework of public participation: that all news sources, both big and small, have the equal ability to provide accurate information to the public. In most cases, however, local media and news have a greater influence on the affected minority communities than major national publications, thus providing another environmental injustice.

Additionally, the way the media presents information to the public about environmental issues has a direct affect on the environmental sustainability. WIPP has continued to reassure the public that everything is safe and fixable, but in reality, the damage was much worse than the initial assessment and will cost the US government almost $2 billion to fix (Vartabedian 2016). This is a major environmental injustice to the Southeast New Mexico community because the workers are put into more dangerous positions. Furthermore, other nuclear facilities must store their nuclear waste for a longer period of time, thus putting other (possibly poor and/or minority) communities at risk.

Most of the events are tracked by two main sources: Southwest Research and Information Center (SRIC), a local information resource, and Waste Isolation Pilot Plant Recovery, a source sponsored by the Department of Energy.