In 1956, seventeen nuclear and thermonuclear bombs were detonated in the South Pacific, each code-named after a different indigenous tribe or group in the U.S. These bombs were designed, manufactured, and named within the Los Alamos National Laboratory (LANL) in northern New Mexico.

“Thus, just as the Tewa in New Mexico were dealing with the environmental and social effects of nuclear sciences at the laboratory, weapons scientists were evoking their name half a world away in an act of nuclear violence”1

This is just one example of appropriation from a long history of LANL and the U.S. government mistreating Pueblo communities.

In the 1940s, the U.S. government asked the San Ildefonso Pueblo to give up part of their land for military purposes; the San Ildefonso Pueblo relinquished the land with the understanding that it would be returned after World War II. 1n 1943, this sought-after patch of land became the site of LANL, where most of the research for the top-secret Manhattan Project would take place.2 For the next fifty years, the various Pueblo peoples living near to and downriver from LANL would have essentially no knowledge or voice concerning the dangerous materials that LANL was leaking and dumping into the air, water, and land. Through destruction of sacred sites, bomb tests, nuclear waste disposal, and poor environmental ethics, Los Alamos has been a pervasive source of environmental injustices for the original caretakers and inhabitants of the land: the numerous Pueblo communities of Northern New Mexico. 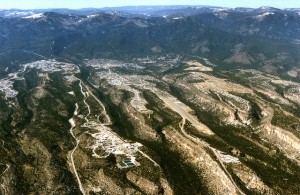 The land that was taken over for the Manhattan project sits at the foot of the Jemez Mountain range and on top of the Pajarito Plateau in Northern New Mexico. These areas are culturally and spiritually significant for Pueblo peoples (especially the Santa Clara, San Ildefonso, Cochiti, Pojoaque and Jemez Pueblos) as well as the Acoma, Zuni, Hopi, Navajo, Mescalero Apache, and Jicarilla Apache peoples.1 This land is scattered with crucial materials such as spring water, medicines, minerals, and clay as well as numerous sacred sites embedded within the landscape. Walter Dasheno, a former governor of the Santa Clara Pueblo expressed his resentment for the effects that LANL has had on the landscape:

“when LANL, for example, proposes to set off explosions on sacred ground, or to dump high level nuclear waste in sacred areas, the affront to our (the Santa Clara Pueblo) culture and religion is complete.”1

Jake Viarrial, a former governor of the Pojoaque Pueblo, expressed a similar sentiment:

“Nuclear radiation contamination is just a modern version of the polio blanket.”3

Because of nuclear fallout and leaked radioactive waste, the land around, downwind, and  downriver from Los Alamos has become polluted with radionuclides (Links to an external site.) that most likely explain the high incidences of thyroid and other cancers in these areas.3 One particular area for concern is LANL’s main dump site called Area G which takes up 100 acres of land directly adjacent to Pueblo lands.2 The landscape of the Pajarito Plateau is made up of many canyons which allow for numerous ephemeral streams that lead to the Rio Grande. Due to sites such as Area G, toxic and radioactive chemicals have been and still are affecting these canyons and downriver communities.4 In 1998, LANL proved this themselves by releasing a study that found significantly higher concentrations of six radionuclides within three stable foods of the surrounding communities (pinto beans, squash, and corn) compared to plants grown outside of the area.4

In order to confront the environmental injustices that have occurred to the numerous indigenous communities near the Los Alamos National Laboratory, it is crucial to reflect on the cultures and histories of these peoples. Their relationships with the land, water, and air that have now been polluted and made toxic, are both ancient and constant. LANL has irreversibly changed the landscape of New Mexico and has exposed unknowing towns and cities to dangerous amounts of radiation. LANL’s treatment of the adjacent landscapes and communities constitutes an environmental injustice because they failed to educate the public and to contain all of their nuclear wastes, leading to numerous health issues for many living nearby. 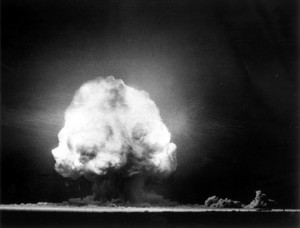 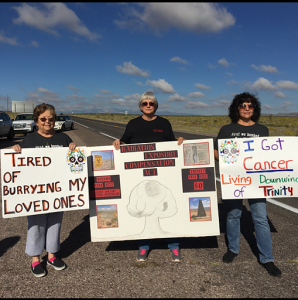