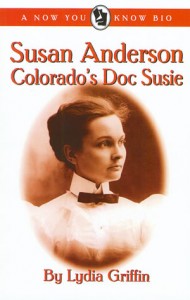 Susan Anderson was the cherished physician of Fraser, Colo., for more than 47 years. Born six years before Colorado became a state, Anderson practiced until she was 84 years old. The biography, part of the “Now You Know” series, is aimed at a fourth-grade audience and provides an interesting look not only at a rural doctor’s life, but also at the mining town and culture she worked in. Doc Susie also makes an appearance in “Prunes and Rupe,” an earlier book by Griffin based on a burro in Fairplay, Colo.