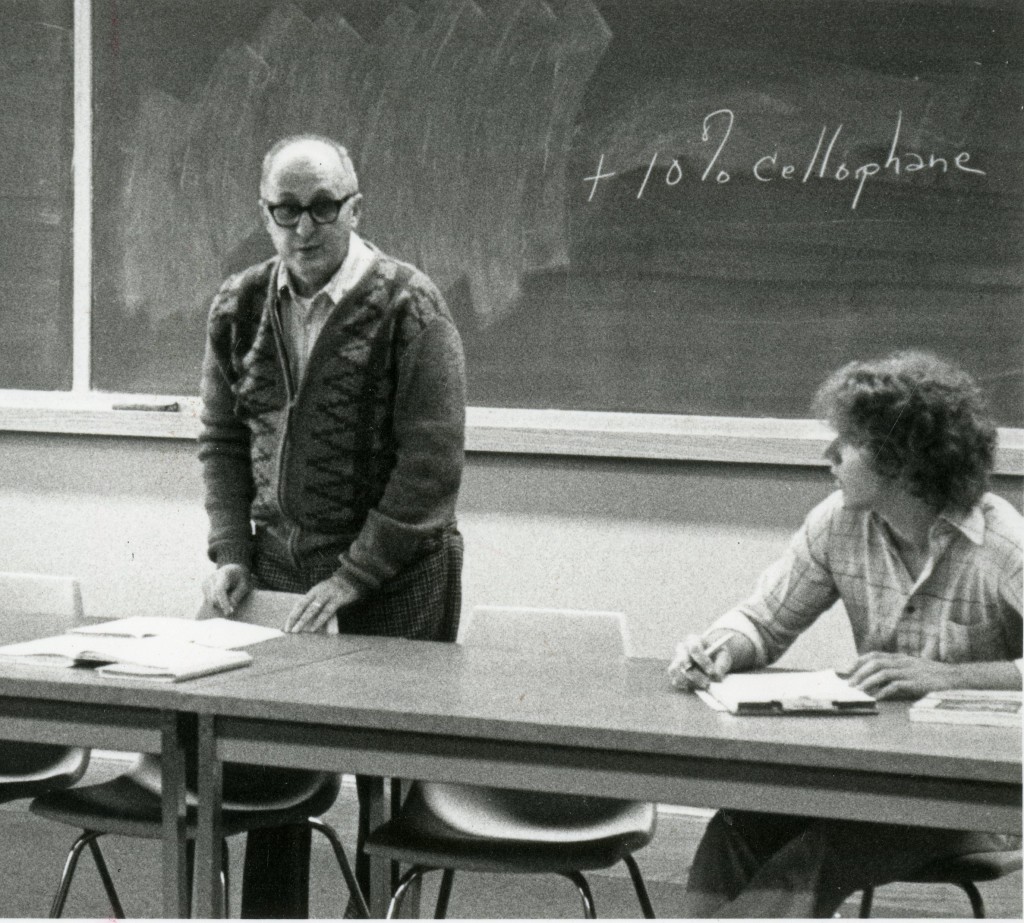 Werner in his home away from home, the CC classroom.

It takes a special character to bridge the divides of a college campus. So often, we stay in our respective lanes – siloed by discipline and department. At 94 years of age, Ray O. Werner remains that character, and his staying power and lasting influence continue to resonate around the college. Born in Edgar, Nebraska, in April 1922, Werner’s upbringing was hard. His parents were the children of German farmers who’d settled in Nebraska, his father a farmer until conditions necessitated a career change to carpentry. Growing up in the Midwest during the Great Depression, Werner was instilled with an iron-clad work ethic from day one – and it has guided him ever since. 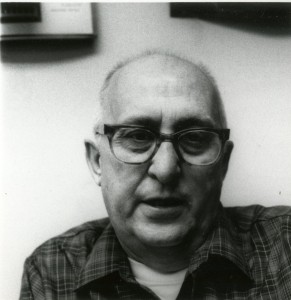 During his time at Hastings College, where he earned his bachelor’s degree in economics, Werner worked as a janitor and lived in low-income housing to pay his way through college. Having done well at Hastings, Werner went on to the University of Nebraska, where he obtained his master’s degree in 1947. While at Nebraska, he won a highly competitive year-long fellowship to the University of Tennessee, where he studied economics.

As Werner studied in Nebraska, the world around him shifted on its axis. In 1941, the United States entered World War II, prompting millions of young people to redirect their energies toward national service. Werner was no different, joining the United States Army in 1943. Assigned to a Special Training Unit designed for inductees who had failed the Army General Classification Test, Werner unexpectedly found himself in teaching for nearly two years before being deployed overseas. Part of the Sixth Armored Division in Europe, Werner served on active duty until 1946. Serving across Europe, his division saw action at Normandy, in the days following the Battle of the Bulge, and assisted in freeing Allied prisoners and liberating the Buchenwald concentration camp, one of the largest on German soil. During the course of his service, he was awarded both the Combat Infantryman’s Badge and the Bronze Star. Honorably discharged after the war, Werner remained a reservist with both the Army and Air Force until 1982, when he retired with the rank of major. Of his military service, he says that the “greatest significance was having convinced me that I not only had the ability to teach, but that it was the career I hoped and planned for.” 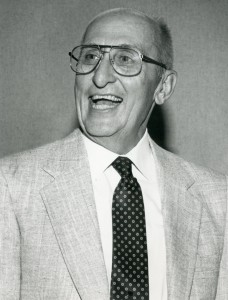 Following his active service, Werner threw himself back into academia. Returning home to the Midwest briefly, he held research assistant positions at both the University of Nebraska and the University of Illinois before arriving at Colorado College in the fall of 1948. His first official day at Colorado College came on September 1, 1948. He was just 26 years old, and arrived as an instructor of economics. He would remain at the college for 38 years, with his final day as a professor coming on June 1, 1987. From that first day, Werner’s drive and dedication to the intellectual community of the college remained the hallmark of his tenure. His lectures became renowned for their flexibility, and he was comfortable speaking to any topic that his students could raise.

Specializing in political economy, Werner’s work was vital for a world entering the post-war years. Teaching during the course of the 20th century’s most tumultuous moments, both domestic and global, his time at CC also coincided with the adoption of the college’s pioneering Block Plan, which came into effect in 1970. As an articulate and informed opponent of the plan, Werner demonstrated his uncanny ability for bridging divides when — following the 58 percent passing vote from the Academic Program Committee — he said, “It’s been a fair fight, I move to implement the plan.” So began a new dawn for Colorado College, one that brought renewed and refined focus to the liberal arts, bringing CC toward the exemplary standing that it holds and maintains today. 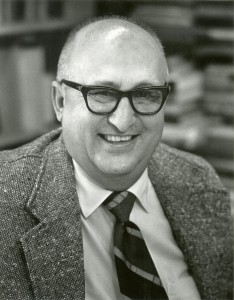 Continuing to pursue academic excellence, Werner went back to school, working on his Ph.D. during summers between academic years of full-time teaching. Conferred in 1960, Werner’s Ph.D. marked the culmination of years of hard work. At CC, he climbed the academic ladder, chairing the Economics and Business Administration Department (now the Economics and Business Department) from 1956 until 1977. He achieved full professor status in 1964. In 1968, Werner’s most telling contribution to his field was installed at Colorado College: the Political Economy major, now known as the International Political Economy major. The major, founded by Werner and Professors Doug Mertz (Political Science), Fred Sondermann (Political Science), and Darnell Rucker (former Philosophy Chair), recognized that the three fields spoke to one another as both academic subjects and also professional fields of work. “Economics,” Werner said at the time, “without a recognition of the sphere of power relations in which it functions, is sterile.” Adding to his profound impact at CC, Werner was one of five Fellows in Law and Economics at Harvard Law School from 1965-67. 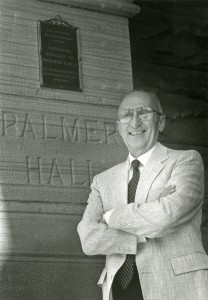 Werner outside his beloved Palmer Hall.

His teaching garnered him numerous awards over the years, including the Sidney G. Winter Award for Outstanding Teacher of Economics and Business Administration, the Chapman Fellowship for Research in Economics, the Louis T. Benezet Faculty Rotating Fellowship, the Lucile and David Packard Professorship, the Burlington Northern Foundation Faculty Achievement Award, and the Gresham Riley Award. Additionally, the Ray O. Werner Award for Exemplary Teaching in the Liberal Arts and the Ray O. Werner Thesis Award are both named for him.

Beyond the classroom, Werner’s passions for athletics and community engagement are as well known as his teaching prowess. Having never been to a hockey game prior to moving to Colorado Springs, he first fell in love with the sport because “it sounded interesting on the radio!” Serving on the college’s Athletics Board for 17 years, as well as being the NCAA and WCHA faculty representative for 22 years, Werner’s love for CC athletics remains as profound as ever. Named to both the WCHA and CC Athletics Hall of Fame, he also received the WCHA’s Distinguished Service Award in 1986. The Ray Werner Classroom in El Pomar Sports Center was named in his honor in 2012. For 25 years, Werner served as the editor of the Legal Developments in Marketing section of the Journal of Marketing. In the wider Colorado Springs community, Werner has served as president of the United Way, president of the Chamber of Commerce, and member of the Board of Directors of the Colorado Springs National Bank and United Bank of Colorado Springs. In addition to this, he has been a local church deacon and co-founded the Colorado Springs Chess Club. 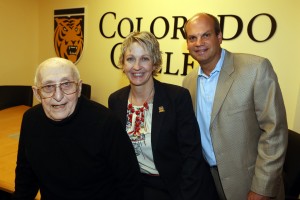 Werner with Colorado College President Jill Tiefenthaler and her husband Kevin Rask, at the dedication of the Ray O. Werner classroom in El Pomar Sports Center.

A fitting testament to such a rich and dedicated career comes in the form of Werner’s continued regular email blasts to a group of 67 friends, former students, and faculty about CC hockey and contemporary economic developments. Werner’s lust for learning continues well into his 90s and remains as vital today as it was when he first joined the college in 1948. We’re thrilled to celebrate Ray O. Werner’s life with Colorado College, and his continued example of excellence both in and beyond the classroom.

If you have photos of Ray to share, please email them to
communications@colorado​college.edu.