COLORADO— Millions of tourists fly every year into Denver International Airport hoping to see the natural beauty Colorado is known for. Huge signs on the walls as they arrive exclaim “WELCOME TO COLORFUL COLORADO,” against color-saturated pictures of people straddling mountain bikes looking astonished at mountain vista they find themselves in, and skiing chest deep in powder with smiles on their faces, and throwing back a green fly-fishing line in a crystal-clear alpine creek.

I was one of these people. I moved to Colorado three years ago chasing natural beauty and outdoor recreation. But now I must come to terms. My love for the outdoors may be contributing to the destruction of the very thing I love most—the outdoors.

The biggest impacts outdoor recreation has on the environment “include soil erosion and compaction, damage to vegetation, disturbance to wildlife, water pollution, increased fire frequency, vandalism and noise,” said Ralf Buckley, author of Perspectives in Environmental Management, in a web post about his book.

Even the mellowest of outdoor recreation—hiking, profoundly hurts the native environment, according to Buckley. But motorized vehicles such as dirt bikes, overfishing and hunting, action sports such as mountain biking or lift-accessed skiing, and any activity that requires construction of amenities for outdoor-lovers hurt the environment the most, said Buckley.

Environmental recreation is the second biggest factor for the decline of threatened or endangered species, according to Scott Miller of the US Fish and Wildlife Service.

“Up to the point where areas of very heavy traffic sometimes had no breeding pairs at all,” said Miller.

Last year, 400,000 people visited the park in remote south-central Colorado, said Bunch. Visitors drive from across the country, burning carbon along the way to admire the natural beauty of a place deeply threatened by climate change. They step on fragile desert plants for a better picture of the natural beauty. They demand construction of more and more buildings to house the amenities needed for so many visitors to see an area untouched by human construction.

Last year, 331 million people visited National Parks, an increase from decades past, according to the NPS website. This increase requires trails and roads, buildings and services, to be put in place so that visitors may more easily see the natural beauty the NPS is known for. These visitors may litter, crush endangered plants underfoot, disturb native animals, and deposit immense amounts of human waste.

People produce 872,539 pounds of human waste camping in the backcountry of National Parks each year, an NPS study found. This waste, if improperly disposed of, can introduce toxins and microbes into soils and watersheds.

Yet Bunch still wants to bring even more visitors to his park.

Outdoor recreation fuels Colorado’s economy with almost 28 billion a year, according to Colorado Parks and Wildlife. This makes outdoor recreation one of our most valuable natural resources. It makes the state’s pockets fatter and its people happier.

People who spend time in the outdoors live generally happier and healthier lives, according to a National Caucus of Environmental Legislators Study.

I make a living in the summer months guiding outdoor recreation. In other seasons, nature eases my mind through the peace I find in skiing, hiking and biking. I don’t know what I would do without pristine natural places. So how do I resolve this predicament?

“Balance,” Miller said. Balancing wild spaces between heavy, medium and light recreation zones with areas of no human travel whatsoever is the key to sustainable outdoor recreation, according to Miller.

Back in the Sand Dunes, Bunch shows a map of his park. We are in a small NPS building surrounded by Piñon trees on a hill near the glittering dunes that seem like a mirage against the jagged mountains. Bunch shows me where 99 percent of visitors never go past. It’s about a square mile past the parking lot. The park covers 292 square miles.

“So we’re not worried, because [human use] is concentrated.” Bunch says.

Because of the relatively small area of human impact, GSDNP has one of the healthiest ecosystems of the NPS service, said Bunch.

For the survival of the natural landscapes, the continued existence of the joy they bring and the economies they promote, we all need to be mindful as we use the outdoors, says Buckley.

But land managers say it is still uncertain whether our grandchildren will be able to experience the same wonder and joy that we do now as we play in the great Colorado outdoors. 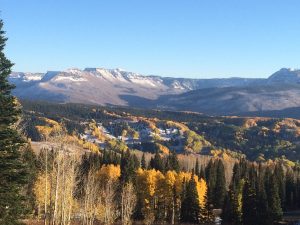 The Flattop Mountains, in Northwest Colorado, photo by Donal Mckenna