I saw, for the first time today, an imposing and oddly shaped mountain that hovers over Fort-de-France.  How did I miss it?  It is huge and abrupt and weirdly shaped. Like Mount McKinley, it is shrouded by dense, swollen clouds most of the time. When I was able to see the mountain briefly during the ferry crossing, its presence changed the proportions of the landscape.

Because my work is historical and comparative, everything I see in the streets and in the landscapes is filtered through the lens of the past and my comparisons to the American experience. I’m very aware that I am in a society shaped definitively by slavery and colonization.  Yet are Martinicans any more bound by the past than African Americans?  An American woman told me, “Martinicans think they’re French.”  I told her, “They are French.” How would she respond to a foreigner telling her that she wasn’t “really” American, that she is African? Both African Americans and Antilleans emerged from the “New” World (“new”, of course, to the Europeans and Africans, not to the Caribs and other indigenous people who had inhabited that side of the Atlantic for centuries). Africa is a dream to us, who are now more than three centuries removed~ “Africa? A book one thumbs/
Listlessly, till slumber comes.” 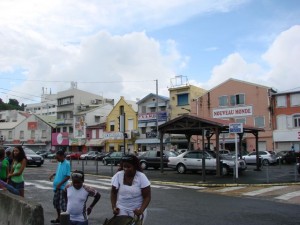 I am “reading for” Africa as I treat the streets of Fort-de-France as a text.  The enormous~ to American eyes~ numbers of interracial families, both tourist and, apparently, native. More black woman/white man combinations than one sees in the States~ and not Halle Berry black women~ women with natural hair who are “traditionally built.” The many deeply black-skinned, long-legged people who “look” African. The African rhythms in Creole. But I am also “reading for” France: the young men in the outrageous hip-hop gear who, when they discover that they are blocking my passage on the narrow, deteriorating sidewalk, say sweetly, “Ah, excusez-moi, madame” and move quickly and gracefully out of the way.  The outrageously priced French products in the grocery store~ candy bars and muesli that are bargains in Paris, even with the exchange rate, are priced as luxuries here. The baguettes and patisseries viennoises. Everyone saying “bonjour” as they enter the waiting area at the ferry dock. Yet what I have seen so far is not the “France in the Caribbean” that the guidebooks promised~ no grand boulevards and outdoor cafés.  And I am reading for “the US”:  the rap that thunders relentlessly from most of the cars.  The extravagant interpretation of hip-hop gear on most of the young men.  The McDo, sitting prominently on the dock, promising “McFlurry avec chocolat Cadbury.”  The “NBA Déoderant” in the grocery store.  Though I haven’t seen a Starbucks yet.

Aimé Césaire was mayor of Fort-de-France for 50 years.  His face greeted me at the airport, and a huge banner of his face and words hangs behind the statue of the revered Schoelcher in front of the old Palais de Justice (now an arts center). France, I hear, wants his remains in the Panthéon in Paris (the Panthéon had an homage to him when I was there last fall~ two huge banners draping the front of the building) but his family says he would never want to be there.  But the sidewalks are deteriorating and the newspapers I’ve been reading say that violent crime is a major problem.  I read a report in day before yesterday’s paper of a demonstration of Christians against violence in the city. There were dozens of demonstrators, all wearing white shirts. People say not to go through the Savane even during the day, though it is a vast park full of wonderful plants and flowers. The guidebooks assure the reader that no one goes out at night in Fort-de-France~ the bourgeoisie retires to their lovely homes and the city closes down.

The tourist of 6 days says, “Why, father of Négritude, does your city look so shabby?  From what I have seen, not much changed from the city described so damningly in your great opus, LE Cahier?” Of course I’m being as bad as those European explorers who would see a tiny patch of a new land and draw all sorts of conclusions about the people and society of that country.  I’m looking for the Fort-de-France of 1900-1950~ another century, and generations.

When I’m not frantic about a bus stop or a book request, I can speak French. When I’m frantic about a bus stop or a book request, I say all the wrong words, knowing they are wrong even as they pass my lips. I start every conversation with apologies for my French (“Je suis enseignant- chercheur~ je peux lire mais je ne peux pas parler”), but then my interlocutor looks amused and says, “But you do speak French. You are speaking French. If I could speak English the way you speak French I would be very happy. Your family is from Martinique.”   I can chit-chat.  I can say what I want on my sandwich.  I can complain to the cab company that I have been waiting for almost an hour at the cab stand and I may as well walk, although “je viens de faire mon shopping et je suis une vieille femme.”  Words are now drifting through my brain in French instead of English.

I have only been here just under a week, but I am trying to keep my eyes open.  A tourist is always “reading for”.  I only have three weeks here; one week is almost gone, and I am still a beginner, a tourist, trying to align what I see with what I have read. The city is my text, along with the books I am trying to read, to photograph, to copy, in the Antilles Room at the Schoelcher. I already know that I will need to come back, to read the books and newspapers and letters that I can’t possibly get to during this visit, and to read the streets, the people, the land- and seascapes that I can only get a taste of.  All that I am not seeing is humming around me, looming over me, like the invisible mountain over Fort-de-France.

One Response to An anxious eye