Over the course of Mike’s life, an interesting number of encounters with renowned persons have accrued. The encounters with celebrities arise sometimes by chance and sometimes as a product of intentional work and grant-writing efforts.  Examples of Notable Personalities and occasions through which Mike made their acquaintance are:

Marty Grosz, musician.  Marty Grosz is a jazz guitarist who for many years contributed to the annual Colorado Springs Jazz Party.  Mike invited and gained funding for Marty to teach master classes and discuss political cartooning at Colorado College, and over the course of many years, the two have become friends.

Brownie McGhee, musician. A young college student in South Bend, IN, Mike Siddoway frequented Vegetable Buddies, and on one occasion was there– with his own guitar in hand– to hear Sonny Terry and Brownie McGhee.  Brownie noticed Mike’s guitar, and played it!

As a 10-year-old kid, Mike heard the Rolling Stones live at Lagoon Patio Gardens, in Farmington, Utah. In the mid-1960s, this venue hosted many legendary artists due to its favorable geographic location: in the days of overland bus travel, this spot was situated midway between San Francisco and Chicago.

John Trudell, poet and activist (deceased).  Long an admirer of Mr. Trudell’s work and message of peace, Mike obtained institutional funds that allowed the College to present an evening of spoken word and the screening of the documentary film, Trudell, that chronicles the life and work of John Trudell.

Muhammed Ali took up residence in Showlow, Arizona, for a summer, and trained daily in the boxing gym of Dr. Paddy Garver, Mike’s uncle. Mike spent the summer working on Paddy’s property, clearing trees and building fence. On a couple of occasions, he went out jogging with the mighty athlete!

Charles Bronson, actor.  Up in Summit County, waiting in a lift line, young Professor Siddoway felt someone run into the tails of his skis. He turned around to way “hey, watch it!” and found himself face to face with this member of The Dirty Dozen and Magnificent Seven.

Aidan Quinn, actor poet and activist. During a scholarly leave at Columbia University, Mike made daily use of the Palisades, NY, post office.  Aidan Quinn is also a customer!

Dave Bidini, journalist, nonfiction writer, and musician. Mike’s become acquainted with Dave, thanks to the ‘Canadian pipeline’ established and maintained by Professor Steven Hayward . Mike enjoys trading hockey banter with Dave.
In some circumstances, Mike’s friendship with these individuals developed at Colorado College after Mike obtained grants to cover their costs of travel and livelihood in USA.  He gained an institutional award of (   ) funds to bring AFRICAN PLAYWRIGHT to CC, and wrote the Fulbright Scholar proposal that brought John Fauvel to the Math Department at CC.

Mike is acknowledged in: Curriculum and the Holocaust: Competing Sites of Memory … by Marla Morris . Ms. Morris writes, “Mike and I spent many hours together in the hot summer without air conditioning in New Orleans [during graduate school]. Mike inspired me to become a scholar. Mike was the first person I had ever met who had a Ph.D. I watched him struggle through his dissertation on mathematics. He taught me that it is more than just stick-to-itness that makes a mathematician.”

Mikes appeared in the CC student  film, Walking Under White Oceans, that was written and directed by Mike Shum, who is a now-acclaimed documentary film maker. 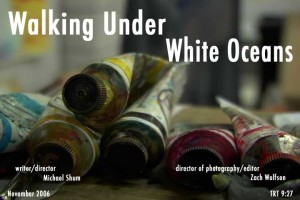