Mike’s wife Christine also is a faculty member at CC. Christine was the first woman hired in a full-time faculty position in the Geology Department, and also the first woman to chair and attain the rank of Full Professor in that department.  Christine is a longtime researcher in the U.S. Antarctic program, and an enthusiastic investigator in the Rocky Mountains of North America. Mike’s and Christine’s household and recreational activities are stimulated by the presence of two stalwart Labrador Retrievers:  Pearl and Bessie. 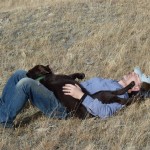 Nothing like an autumn nap with warm dry grass, below, and warm relaxed Labrador, above. 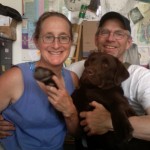 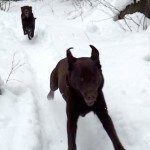 SNOW-always brings out the best in us.

Bess and Pearl were preceded by another magnificent Labrador, Winona.  She’s with us always!

Mike grew up with three brothers in Idaho and Montana, where his father engaged in research on the control of wind erosion and directed an Agricultural Research Lab.  Working with colleagues, Dr. Frances Holly Siddoway developed a wind erosion equation that is still in use today. Mike’s brother Jon carried on in that line of work; he is State Rangeland Management Specialist for the NRCS in Montana.

Mike’s mother Beverly studied nursing at the renowned St. Benedict’s School of Nursing, and practiced nursing in community hospitals, all of her life. Mike’s brothers Mike and Tom continue this tradition:  Paul is a family practice physician in Butte, MT, and Tom is a nurse, employed for many years in Chicago and, of late, in Bozeman.

Family forebears and relations still reside on “the pretty side of the Tetons” in southeast Idaho. As an example, distant relations run the Siddoway Wool Company, a source of very nice western blankets!