I have conducted fieldwork throughout the Himalaya and Southeast Asia for well more than a decade, and have already forged collaborations with geoscientists in Vietnam, China, Thailand, Malaysia, Myanmar, and Korea. Most of the fieldwork was done in close collaboration with Nigel Hughes (UC–Riverside), postdoctoral student Ryan McKenzie (Yale), a variety of co-investigators from around the world, and various CC alumni including Karl Thompson, Katie Snell, Karri Sicard, and Zachary Snyder. Our work is aimed at integrating stratigraphic, macrofaunal, sedimentological, and geochronologic data to examine a wide variety of paleoenvironmental, tectonic, and paleogeographic problems associated with the early evolution of Gondwanaland. In particular, we are interested in reconstruction of the northern Indian margin during the Neoproterozoic and early Paleozoic. Detailed sedimentological and stratigraphic work on Cambrian strata in northern India (Myrow et al., 2006a,b) established the nature of depositional systems at this time. It also allowed us to demonstrate that along the strike of the entire Indian margin, from Kashmir in the west to Tibet in the east, earliest Paleozoic strata of the Tethyan belt have a consistent geologic history that includes similarity of lithofacies, trilobite faunas, and paleocurrents. In addition, based on age spectra of detrital zircons, we have demonstrated continuity of sediment dispersal systems across the various lithotectonic zones of the Himalaya, and the extraordinary scale and nature of depositional system across equatorial Gondwanaland during the Cambrian (Myrow et al., 2003; Myrow et al., 2010; Hughes et al. 2010). Our detrital zircon work led to our suggestion that high levels of volcanism associated with Gondwanan assembly had a strong influence on climate, sea surface temperatures, and ultimately the nature and timing of the Cambrian explosion (McKenzie et al., 2014). We also recently showed that shifts in Sr and Os isotopes in the world’s oceans at 16 Ma were dynamically linked to changes in uplift along major faults in the Himalayas, and thus to erosion of specific source rocks (Myrow et al., 2015).

Our work has led to a high-resolution biostratigraphy for the Cambrian of the Himalaya. This includes a large monograph that documents trilobite fauna from several sites in the Tethyan Himalaya (Peng et al., 2009), and another that focuses on brachiopods (Popov et al., 2015). We also provide the first descriptions of Cambrian trilobites from the eastern Himalaya (Bhutan) (Hughes et al. 2010), and use them to show a paleogeographic link between the eastern Himalaya and the North China platform (McKenzie et al., 2011).

On other fronts, our palaeomagnetic analysis indicates that the Tethyan Himalaya was clearly associated with the northern Indian margin in the early Ordovician (Torsvik et al., 2009), and that based on analysis of calcite twins, we show that there was coaxial strain during a Cambrian–Ordovician tectonic event in the Himalaya relative to that of the current Himalayan orogeny (Paulsen et al., 2007). We also provide precise depositional ages for the rocks of Mt. Everest and show, with the application of geochronological and stratigraphic constraints, that the South Tibetan Fault System (STFS) cuts up section along strike towards the east (Myrow et al., 2009). Finally, working with CC student Becky Zentmyer, we showed that a large travertine platform exists along the trace of the STFS and that high 87Sr/86Sr ratios in the travertine reflect subsurface fluid interaction with radiogenic crystalline rocks of the underlying Greater Himalaya. Uranium-series ages of the travertine ranged from 5400 a (± 950 a) to 11 600 a (± 1000 a), and these were used to estimate fluvial incision rates and show that deposition of the travertine coincided with an interval of greater intensity of the Indian monsoon (Zentmyer et al., 2008).

I just completed a project, funded by NSF, that continued our work in the Himalaya with collaborators Nigel Hughes (UC, Riverside), Ryan McKenzie (Yale), Ganqing Jiang (UNLV) and Shuhai Xiao (VPI). We examined the relationship between Proterozoic and Cambrian sedimentary rocks within the Himalaya, and compared these strata with those in the northern part of the Indian craton in order to advance a large-scale stratigraphic synthesis of the region (McKenzie et al., 2013). One result of this work is a paper on the implications of the Birmania Formation, Rajasthan, India, in which we provide the first age constraints (U/Pb ages and microfossils) on this well-known late Proterozoic phosphatic deposit. We also described the an enigmatic tubular body fossil Shaanxilithes ningqiangensis from Precambrian-Cambrian boundary strata in the Lesser Himalaya (Tarhan et al., 2014).

Although some debate still remains concerning the assembly of East Gondwanaland, much greater uncertainty exists about the arrangement and evolution of equatorial peri-Gondwanan blocks during the early Paleozoic. This is one of the most significant unresolved problems in Phanerozoic paleogeography. We are working to extend our integrated study of the Himalaya eastward to determine the limits of the northern Indian margin, as well as determine the westward limits of adjacent Gondwanan fragments. This work includes studies that I have done in recent years with postdoctoral fellow Dr. Jitao Chen (UC-Davis), and multiple CC students in Inner Mongolia. In our first paper from this area (Myrow et al., 2015), we link a Cambrian–Ordovician unconformity to an orogenic event in the northern Himalaya, and thus propose a link between the North China block and Gondwana at this time.

The neoproterozoic and cambrian of the Tethyan Himalaya: a test of models of core Gondwanan construction 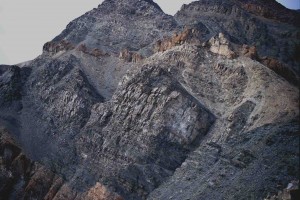 Photo: Two well-developed upward-coarsening cycles in upper part of the Middle Cambrian Parahio Formation of the Spiti Valley region of northern India.  Lower cycle rests on orange dolostone bed at top of underlying cycle in lower left of photo.  The lower cycle is 61 m thick, and is capped with 18 m thick unit of amalgamated HCS sandstone (center of photo). An overlying cycle is 29.6 m thick, and is capped with a 12.8 m thick bed of orange dolostone. These are deltaic cycles taht in cases contain fluvial strata. The carbonate beds, where present, represent the transgressive systems tracts of the cycles.