The group obtained an orientation to  the city, its geographic location, and the Arno river, via a walking tour of Florence led by Susan Ashley.  Emphasis was on the high medieval/ Renaissance periods and on the Arno’s role in shaping the city’s history.  Mary Savina contributed insights on  the city’s layout and its location upon the flood plain of a river that has its headwaters within the rugged spine of the Appenines.

The Arno and the surrounding area

A rich web of societal- historical, environmental, and resource  relationships link Florence to the Arno River, Florence to  Pisa, and the Arno River to the Sea and  coastal environment. There are powerful insights to be gained through interdisciplinary inquiry and research of the historical relationships that are relevant to contemporary issues of urban development, agriculture, water management, transportation and distribution of goods, avian ecology, and flood control.

Il padule di Funcecchio is a wetland complex that is fed in part by the Arno River, downstream of Florence and nearing the municipality of Pisa.  The largest remaining inland marsh in Italy, the padule have been used and transformed over centuries: canals for transport, dammed for fish, drained for agriculture.  It has been a rich source of resources, including plants, fish, and game. It is currently a wildlife refuge, providing important habitat for birds as well as for other types of animals and plants. 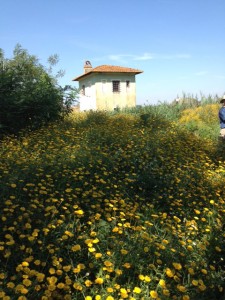 Marty St. Clair, Coe, explained the ecological importance of wetlands in Italy as well as in the US.  They are exceptionally rich in species, have high productivity, filter water, store water during floods, and aid in ground water recharge.  Despite their value, many have been drained and lost forever, leaving limited habitat for wetland-dependent species as well as changes in hydrologic function.

Campo dei Miracoli – Susan Ashley and Janet Smith (former ACM liason in Florence) presented on the site, design, and construction of the buildings.

Why does the tower lean? The Duomo, baptistry, and tower were are built on a marsh beginning in the 12th c.  The tower was built with full knowledge of the risks of the site, and several features of the design reflect attempts to build a stable structure on unstable substrate.  Over the centuries several major interventions have been undertaken to the stabilize the tower, which leaned despite the measures taken during construction.

Why did the Romans settle at Pisa, located between two rivers and surrounded by swamps?  Perhaps it is because of the strategic location between two major ports.  The Duomo and baptistry were completed by the end of the 12th c. and built adjacent to a church built dating from the 1st century.  Byzantine, Roman, early Christian, and Gothic elements are visible in the architecture.