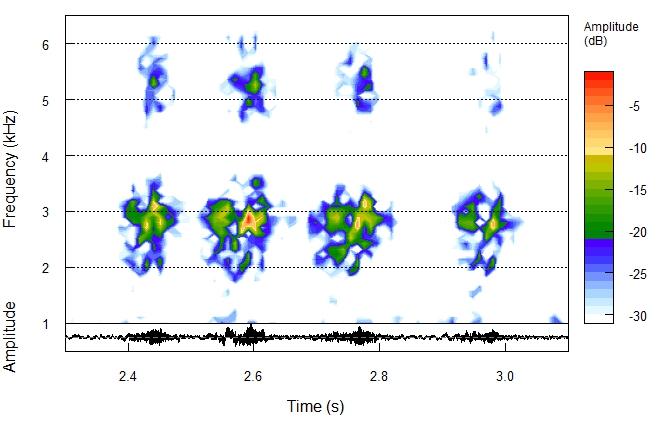 The call of a Black-billed Magpie (Corvidae) recorded in Colorado Springs, sound collected with an AudioMoth acoutic recorder..

This is a mostly new area for me.  Previously I led a bat monitoring program in Illinois which included extensive acoustic monitoring. I’m interested in developing a broader research program in ecoacoustics – exploring environmental soundscapes across built and natural environments, at scales ranging from populations to ecosystems, as well as bioacoustics – the study of animal sounds.

In the summer of 2019, this journey began with three Colorado College students conducting research in the Colorado Springs area, comparing across three classes of soundscapes: 1)  residential zones; 2) commercial zones; and 3) city-owned parks & open spaces. Among these, we looked for possible differences in sonic components of the city’s varied soundscape, classifying detected sounds into geophoney (natural sounds not produced by animals – sounds of wind, rain, thunder, etc.), anthrophony (sounds produced by humans – music, machinery, voice, etc.), or biophony (natural animal sounds).  We conducted this research using affordable, open-source AudioMoth acoustic recorders, which were deployed in various locations throughout the summer.  Additionally, the students completed evening walking transects in the residential zones, commercial zones, and parks & open spaces utilizing an ultrasonic acoustic bat detector (the Echo Meter Touch Pro 2), to evaluate possible differences among these classes of soundscapes with respect to bat activity. We plan to present preliminary findings of this work in the Fall, at Colorado College’s SCoRe (Summer Collaborative Research) Symposium.  But in the mean time, Our local newspaper, The Gazette, did a short video & article about this research.

In preparation for summer 2019 research — and in collaboration with Parks, Recreation and Cultural Services at the City of Colorado Springs — I collected some data at Garden of the Gods which you can look at and listen to here.