Yesterday afternoon, before seeing King Henry V at the Globe Theater, another student and I went to the Hayward Gallery to see their Invisible art exhibit. It was an incredibly interesting experience! The various works of art on display were all very different interpretations of the idea of art as invisible. One display was a piece of paper that the artist had stared at for 1000 hours. Another was an empty room full of air conditioners. One artist had not completed a work of art he was supposed to have made for a different gallery, so he reported that someone had stolen the painting from his car. A police report was issued to help locate the “missing” art. It is now on display as part of this invisible art collection.
Many exhibits were photographs of invisible monuments and memorials that had been constructed across the world. One is an inverted fountain in Germany. It had once been an above ground fountain that the Nazis destroyed. After the war, it was reconstructed underground, as reflection of what it had once been. Another memorial is the names of victims written on cobble stones. The cobble stones pave a walkway with the writing facing the ground. Visitors to the area have no idea what they are walking on.
My favorite piece was an invisible labyrinth. In a large, empty room, we put a device on our heads that resembled headphones. Then, we walked through the room. Every time we hit one of the invisible walls of the labyrinth, the headset would vibrate. Slowly but surely, we made our way through the labyrinth.
One exhibit was a completely dark, windowless room that we had to walk through. Immediately, I grabbed onto my friend, fearful of the unknown that resided in the dark. I was worried that something would grab me, or that I would run into some unknown object or wall. Together, we found our way to the other side of the room. When we found the exit door, I was curious to see how big the room actually was. I began following the wall around the room, discovering it was much smaller that I had imagined it to be.
As I walked around this room, I thought to myself, “this must be what it is like to be blind.” I thought of the fear I had initially felt when I walked into the dark room. It was so uncomfortable because I couldn’t see, and therefore didn’t know, what this room contained. I can’t imagine how fearful I would be if every room I walked in gave me this experience. It must take so much courage for someone who is blind to walk around. Honestly, I don’t think I would be able to explore new areas, not being able to see what was around every corner. When I was in elementary school, we watched a cartoon in which a prince was asked if he would rather loose his sight or his hearing. I had initially thought I would rather loose my sight, because I love music so much. The prince answered that he would never want to loose his most precious possessions, his eyes. As an elementary schooler, I disagreed with him. Now, I understand him.
After leaving the dark room, I saw a couple standing together in front of another display. The woman was reading the information about the art to the man. Then I realized that he was blind. All I could think was that it was so interesting that a blind man would choose to see an invisible art exhibit. When people capable of sight go to an art exhibit, they primarily use their sense of sight to experience and comprehend the art. At this exhibit, however, they cannot use it as their primary way to experience this art. A greater part of our imagination must be engaged in order to comprehend this exhibit. In some ways, I was inhibited by my ability to see. Sometimes, I very desperately wanted to see something in the invisible art. I would search blank pieces of paper, wanting something more. Yet, the blind man, lacking sight and therefore this inhibition, would have been able to more fully engage his imagination and understand the art perhaps more than I ever could. 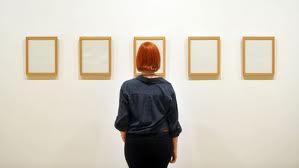