The first week of Idris Goodwin’s class, Writing for Performance – Watch the Clock, was a creative week of performance poetry. This is my second class with good ol’ Goodwin (good young Goodwin, rather), and has already become one of the most bonded groups of students I’ve ever had the pleasure of spending time with in a block at CC. It’s all due to the Goodwin and his way of bringing the best out of us. He has us sharing parts of ourselves on stage through our poetry.

He gave us options as to the theme of our poem for the first week. We could write about where we come from, our name, what it’s like to be a (fill in the blank) for those who don’t know, or an acceptance speech. We read examples of these four topics on the first day of the block and then dove right in creating poems of our own. Idris performed his poem about the funny mispronunciations, the derivation, and connections to his name to start the block off right.

We used class time Tuesday, Wednesday, and Thursday to perform our poems for the class of 26 students and 1 Idris on stage in the screening room in Cornerstone Arts Center to workshop them and get feedback about what’s working and what’s not. Then after taking the compliment sandwiches back to the drawing board, we revised our poems and brought them to Atlas Preparatory Middle School in Colorado Springs.

We spat bars for teenyboppers in the gym and melted faces (aka we performed our poetry for 7th and 8th graders and they seemed to thoroughly enjoy themselves). 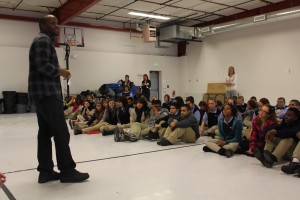 Idris was first to bring his rhyming game to the youngsters. He let the students and teachers know that if they like what they hear, they can snap their fingers, make a guttural “MMMmmm” with pursed lips and a firm head knod, or acknowledge the poet in any other way they see fit. “This is poetry, not choral music, if you like what you hear, let them know.” 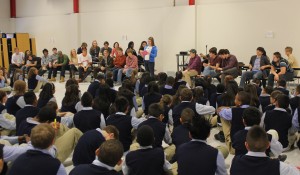 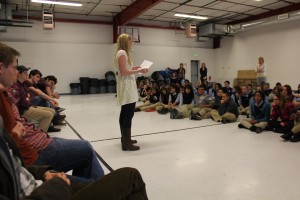 A student raised her hand and said she could relate to the hilarious yet heartfelt poem by Izzy Parkinson ’13 on the topic of dyslexia, because she has the same struggle. That’s real talk. 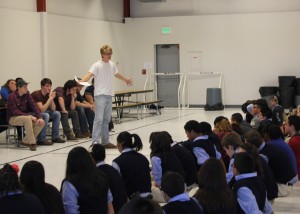 Xander Fehsenfeld ’16 rocked their world with his poem “Coconut Coated”. I’ll post a video of it later in the block, it’s an experience not to miss. 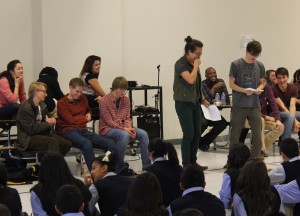 Myself (Denali Gillaspie ’13) and Wes Brandt ’14 rapped, sang, beatboxed, and danced a mash-up of songs for our poem “Dear Shuffle” an ode to the genius of iTunes shuffle. 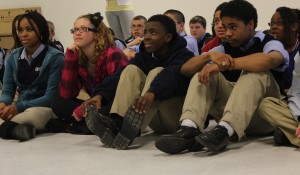 Atlas Preparatory 8th graders. At the end, we left time for questions and comments. Some of the best were: Have you ever written a poem about butter? Have you ever written a poem with all the people in your class? (Challenge accepted). Do you get afraid to speak in front of people? I like the poem about dyslexia. Why do some poems rhyme and some poems don’t? That kid looks like Edward from Twilight… and on. 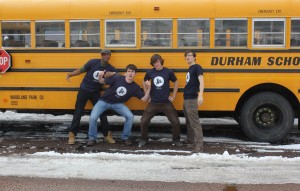 We got swaaaag. Rocking their Atlas Prep shirts like the face-melting poets that they are. 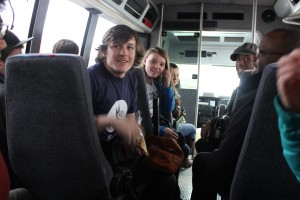 Naturally, there were freestyle rap battles on the way home. Shane Lory ’16 and Idris took a few rhyming jabs at one another, all in good fun. All in phenomenal fun. Friday night I hosted a class gathering at my house (ah, the perks of being an off-campus senior with a living room that is easily turned into a rocking dance floor…) and we reminisced about the week, gave abundant shoutouts to one another for bearing our souls and sounds on the stage for one another, and grooved. On to another week of going hard.

I'm a senior Art Studio major, with a double minor in The Book and Asian Studies. I play women's rugby at CC, sing a cappella in CC's only co-ed group, Room 46, I practice hand stands once a day, I recently re-fell in love with poetry, I'll always take an opportunity to travel, I'm not allergic to anything, I'd rather be barefoot than wearing shoes, I'm a terribly uncoordinated skier, but I love to ski, when I have spare time I play guitar and bake brownies, and some of the happiest times in my life have been working on farms. Thanks for peeping the blog. In the wise words of Ellen Degeneres, "Be kind to one another." View more posts