‘Twas a productive week. It was a marathon of scenes, monologues, and choreopoem collaborations. We read many examples and excerpts from plays and poems and then spent the week writing and revising our own. The magic seeps through in the revisions, so we’ve been told. Idris tells us “The performance writer writes in real time. He/she must balance what the audience knows, when they know it, how they know it, and how it affects what they already know.” Since this is a class in which we write for performance, our pieces must beg to be read aloud, with animated voices and bodies to bring it to life.

Last Monday, we were given thirty precious minutes to split up into our six groups and create a choreopoem. This term was created in 1975 due to Ntozake Shange’s For Colored Girls Who Have Considered Suicide When the Rainbow Is Enuf. It is poetry with choreography and stage directions included in the text. Each group discovered something they had in common and started writing their choreopoem. Here is an example of what a group created in thirty minutes: 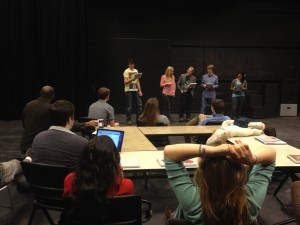 A choreopoem performance about the trials and tribulations of water parks. It made quite the splash (that’s when I nudge you in the side of your rib cage with my elbow, you look at me stern faced and say that’s just not very creative or “punny” and we move on to the next section of this blog post).

The rest of the week, we went for an exciting shift to have class in Armstrong Theater. We wrote 1-3 person scenes to be performed by our fellow peers. After each scene, we broke it down into what works and why it works (great perception shift, really created believable characters, the opening monologue really evoked a reaction from the audience, etc.), and the converse of what fell short of its potential or what was unclear (why did the man with the backpacks get in the car so fast, have you thought about how old you want the audience to think these characters are, explore the possibility of being more subtle, etc.) 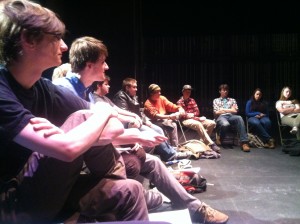 Sitting on the stage of Armstrong Theater, we all had front row seats to view each other’s scenes and monologues. 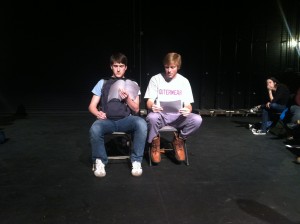 When Friday rolled around, we performed our revised choreopoem group collaborations, and it was great to see the progress that had been made. Lots of edits and fine tuning. 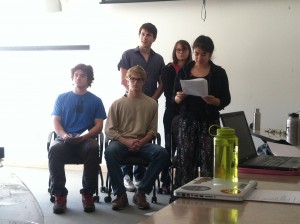 We also had the pleasure of inviting poet Shane Romero into our classroom Friday afternoon to show us another avenue to what performance poetry can be. He’s only 25 years old, but is now off on tour, making a name and a career for himself as a performing poet! Blew our minds. We got to pick his brain about the business and creative aspects of being a poet for a living. Shout out to Shane, check out his poetry here: http://www.tumblr.com/tagged/shane%20romero

I'm a senior Art Studio major, with a double minor in The Book and Asian Studies. I play women's rugby at CC, sing a cappella in CC's only co-ed group, Room 46, I practice hand stands once a day, I recently re-fell in love with poetry, I'll always take an opportunity to travel, I'm not allergic to anything, I'd rather be barefoot than wearing shoes, I'm a terribly uncoordinated skier, but I love to ski, when I have spare time I play guitar and bake brownies, and some of the happiest times in my life have been working on farms. Thanks for peeping the blog. In the wise words of Ellen Degeneres, "Be kind to one another." View more posts