One really gets of a sense of the “planning” aspect of urban planning when it comes to the superblocks. Superblocks made up the core concept of what the utopian architects of this city had planned. Here are some numbers:

Exhibit A- a building: 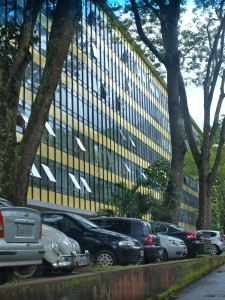 If you want to see the true rationality behind it all, consider the naming system. Instead of following the tradition in Brazil of naming streets or buildings after public figures, every street, and building is a number. For example, here is the welcome mat of this building: 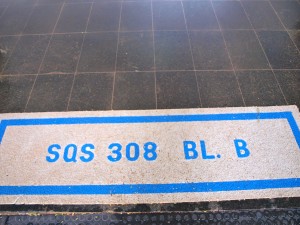 The same occurs for north-south avenues but with W/E references. In practice, since not all Brasilian think best this way, people give directions just like anyone else “The bus stop next to the kindergarten” or “the market opposite of the church”. Churches or gas stations are good landmark indications because of the sameness of most of the buildings within a sector, the Bauhaus style more consistent here than I would guess anywhere on earth.

The commercial block of the neighborhood

The idea behind the superblock was utopian in nature. In theory, each superblock was to be a small, self-sufficient community. There was a preschool and kindergarten, church, and a commercial block in each one. In theory great, in practice…not so much. Many superblocks are lacking the promised structures, though most of them do contain a commercial block, which is the liveliest part of the city I’ve seen. The buildings themselves, dreamed of a utopian place for those of all social classes to interact, are seemingly abandoned. Each of these buildings is required to have an elevated first floor so as to allow easy walking access. The first floor seems like an obvious meeting area, shaded and with amble seating area, but no one is there. I believe that it again goes back to the lack of numbers in the buildings. Perhaps 50 years ago this place was bursting with people walking back and forth but these days there is a feeling of abandonment throughout.

The residences of the superblock would be, say, the vice president of a large company. He could possibly live in the same superblock with his driver. This worked for a little bit, the mingling of social classes. But eventually the upper class moved out to the south part of the city next to the lake.

One can probably see how maddening the monotony of building styles could be to certain people. The city’s severe building codes frustrated people. Imagine living in a gated community with strict visual guidelines like what color you can paint your house and what style fence you can put up. Then imagine that community extending to your entire city, and not really having an option to leave. Times have changed since the 50s though, and I stumbled upon a neighborhood that, while originally all of the houses looked identical, the rules were relaxed in the 1970s. The area was originally built for merchants and professionals (whereas the superblocks were mostly for the workers who built the city), and the owners took it upon themselves to paint the houses different colors and expand the structures. One can perhaps sense a similar base for these houses if you know what you’re looking for, but they have for the most part taken on individual styles.

The nicest part of the city, home to many of the foreign embassy workers in the city, is South Lake. Because the apartments are still so costly in the city it has become most cost effective (in terms of money per square foot) to built a house in this part of town. Many of them sit on streets that border the large lake, ending with a cul-de-sac. Apparently, fences used to be illegal in this area, but the rule was scraped with rising crime rates. Every house I saw had one. Just as in the superblocks, I saw almost no one on these streets.

It seems as though the neighborhoods are trying to adapt and account for the plan’s deficiencies, but anything with this number of people involved and city building takes a lot of time (the 41 months it took to build the city is a rare exception). I’ll explore what this means for an aging city in my next post.