Excuse the pun in the title, but this post is about the time constraints of our class’s press project, and I couldn’t help but make the nod to David Bowie––may his soul soar epically through the farthest reaches of outer space. 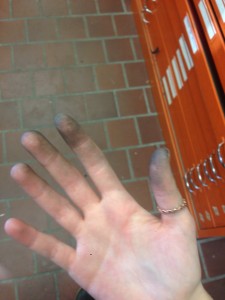 Tomorrow is the last day of class (already!) so we’ll be taking as much time as necessary, presumably the entire morning, to print our book. For three hours this afternoon and three hours on Monday we’ve been setting our pages of type, putting the spreads in a desired order, choosing colors for paper and ink, and carving linoleum slabs for illustrations. Setting type is slow and relaxing. Also, one’s fingers tend to be covered in poisonous lead residue by the end.

Carving linoleum, on the other hand, has proven to be far more frustrating from my perspective. It took me two hours and three attempts to finish my first illustration last night. Tonight I spent another two hours filling my desk with gray shavings, but this time I was able to complete two images without making irreparable mistakes. So I suppose practice helps, and I’m rather content with how they look. However, my fingers have suffered much worse than a little metal grime in this case. My characteristic carelessness has brought about a few jabs from the carving tool, and while two of them were minor, a rather forceful one from this afternoon at the press gave me a profusely bleeding left thumb and a throbbing pain that didn’t subside until after dinner. No matter that Aaron warned us of the sharp dangers––I’m still incredibly prone to risk-taking and clumsiness. 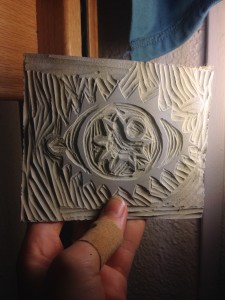 Can’t wait to see how it looks once printed.

We chose a deep reddish brown as the ink for our text, and Aaron showed us how to follow the Pantone swatchbook formula for mixing. It’s a painterly process, and if you know enough about mixing colors you can step away from the swatches and create your own. 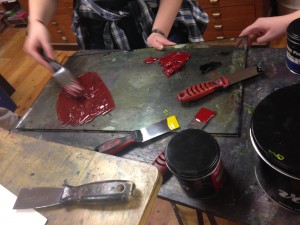 Once the ink was made, a few of my classmates began printing. They completed all 30 copies of our title page, dedication, and colophon, which is the page at the end that says where the book was published and when. It seemed like we accomplished a lot today, but we still have a great deal of work to do tomorrow. Thankfully Aaron keeps coffee brewed in the pot by the door.

I’m certainly interested in returning to the press under circumstances that are less time-sensitive. I would love to put even more effort into the content and design decisions. Paradoxically, I’m impatient with my own creativity, considering how difficult I find it to revisit and revise the things I make, and yet I don’t like to feel rushed. In terms of hanging out at the press, I hope to be able to choose an event or two from the college calendar many weeks in advance, and carefully design and print posters for them. The ones I’ve seen thus far are astonishingly eye-catching, and it’s evident how much work goes into each one.

Now for an unrelated note, regarding last night’s reading: If you’ve never heard of the book thief Stephen Blumberg, his story is fascinating. He stole approximately 286,000 books from university libraries across the nation in the 1970s and 80s––not to sell, like many book thiefs before him did, but to keep in his own private collection. His obsession with Victorian-era objects began when he was 12 years old and his behavioral tendencies were clearly influenced by his family’s mental health history (a topic that is very interesting and important to me). Even Colorado College’s Special Collections has seen the expert thieving hands of Blumberg! He made away with five books on the history of the American West, but only two were attributed to our library and eventually returned. To find out more about the bibliomaniac, click here.