We’ve made it to the end of first week in the Film and Media Studies Sundance class and already it feels like we’re running a marathon! As part of our preparation for heading to the festival next week, we’ve had screenings of past years’ Sundance winners and in-class discussions on what makes indie films unique. So far we’ve been unable to come up with any concrete conclusion on that, but it seems that’s the whole point of Indie films ‘breaking the mold’ and transcending traditional storytelling conventions, isn’t it?

What a roller coaster ride. In all these films covering such diverse subject matter, cinematic style, release dates, and production budgets, we have found common threads that may be able to help us narrow down what makes a Sundance movie a “Sundance Movie” .

Like any independently produced material, an indie film is going to either suffer or benefit from its financial limitations. Yes, an independent filmmaker may have to sell her soul to come up with the funds just to get the project on its feet, accepting from the beginning that she will likely make no profit from it should the thing ever be completed. But with this terrifying investment in self-expression comes a certain kind of freedom that filmmakers can’t always get working under the wing of a Hollywood studio. Because of this, the kinds of films that make it to Sundance exist because of the filmmakers’ determination to stretch the limitations of their own minds and, sometimes even out of desperation, create something out of nothing.

The “aesthetic” of Sundance, if we were to assign one, would be one of daring and sometimes even subversive storytelling methods. While not all Sundance films are devoid of happy endings or satisfying and expected ‘movie tropes’, many of them do test the best known formulas of script-writing and cinematic presentation.

As a class we have taken it upon ourselves to write a ‘Sundance’ anthology feature. Following a helpful 7-beat formula laid out by Clay Haskell, we have structured our scripts to align with recognizable story progression bullet points – or as Clay calls them– beats. The trick now is how to experiment with the beats in unexpected ways. The most liberating part of learning and understanding the rules to a formula is then knowing how to break them.

Hopefully after editing the last draft of our script this weekend, heading off to Sundance for a week to watch film after film until our brains are mush, and eventually returning to crash and burn in a final 48-hr film project, we will have succeeded in breaking just a few rules in recognizably ‘innovative and original’ Sundance ways. 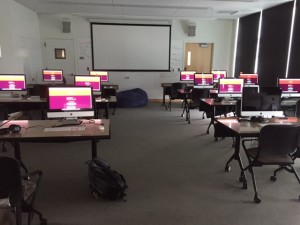 More to come soon!
Thanks for reading.

One reply on “Colorado College and the Sundance Kids”