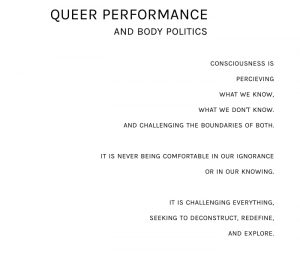 Queer Theory is not just for Queer Bodies to participate in.

As I define it, queerness can be as minute as an identity signifier outside of the normative, but it can be as expansive as deconstructing and reconceptualizing our “natural” worlds. Queerness, through subversion, transgression, and the necessity of survival, exposes the artifice of society and what  has been  assumed to be the essence of humanness. It interrogates the idea of an essence at all.

On the first day,  a classmate of mine said
“There have been certain people who have made sense of the world for others..”
Those people in American society have been white, hetero, and male. Therefore,  the compulsory understanding of natural has aligned itself with their  positioning. A position of power. A position of regulation. And a self-perpetuating, self-sustaining, misconception of naturalness functioning, solely, to reinstate a dynamic power.

“The fallacy of binary opposition” is a phrase I first encountered in Mock Trial. For those of you who have yet to embrace this deliciously nerdy subculture, it is essentially learning a real case, with an assigned position (defense or prosecution), and then competitively reenacting that case in courthouse.  Where “binary opposition” asserts itself is in the construction of our team’s argument. We have to believe that we are right and they are wrong. Us/them, right/wrong, prosecution/defense –those are our functioning binaries.  However, in order to move forward, we have to learn both sides of the story (high-five debate team tactics)– and this is where the fallacy is revealed.  The narrative of opposition between two objects (between us and them) is the one we are creating.

And I think we can all agree that we are surrounded by spectrums and fluidity, not hard lines. Or maybe we don’t agree… but,

Binary structures work as a tool to create power dynamics, founded in an assumed or constructed, irrefutable truth. For example, the gender binary male/female: where male is the dominating force. One of the underlying assumptions is the “truth” that women are weak and men are strong, which gives reason for men to be in a position of power. And (surprise, surprise) these support systems take a binary form: strong/weak, natural/unnatural, sensible/silly.
​
While homosexuality threatens (or challenges) the power dynamic of the male/female binary, the term was created* in conjunction with its own binary force: homosexual/heterosexual. What this, then, did is reestablish lost power within the heteronormative, where homosexuality is subordinate, unnatural, etc.

​Part of this “truth” is grounded in the assumption that the dominating side is the majority, and it’s power is simply a matter of numerical fact. And in some instances, binarisms do follow this narrative. But can dominance be as basic as having the most bodies? How much of it is really the power of numbers or just the reinforcement, and gravitation towards, a larger binary construction for justification. What binary is that, you ask? Majority/minority. But if we think about colonization, which party had the power? The colonizer or the colonized? The majority or the minority?

Or if we think about the dynamics of a plantation house, where the plantation owners were the minority and the slaves the majority. A different binary was put in place to ensure positions of power, white/black, where scientific “truths” of “natural evidence” of inferiority were created to justify claims of necessary control.

In no way am I trying to invalidate the existence, significance, or consequences of oppositional binaries we are swimming in– male/female, white/black, good/bad, etc– but more so wish to illuminate the destructive pattern of thought (its sole purpose being to establish the dominate/subordinate power dynamic). ​​And for those of us who want to move towards balance and equality, or (at least) consensual inequality, we have to strip down the layers of our reality.

So where do we go from here? Well,

TO EXIST CONSCIOUSLY WE MUST KNOW THE WAYS IN WHICH WE HAVE BEEN CONDITIONED TO MOVE, THINK, AND BE. ​

Queerness, as I embrace and use it, is a resistance to this conditioning.

To be black in America is to be criminal. To be non-binary in America is to be invisible. I do not exist. I am not allowed to exist. This blog is about consciousness, it's about revealing the infrastructure of the matrices we leave in. A CC student. A theater major. A body, politicized ,by the normative. Let's go on an adventure. View more posts