One class, two professors; this week diverged in two educative directions. Dick’s material is the numbers and figures I, in all honesty, have a much harder time translating into words. My head is swimming with the ratios of the surface area and volume of Earth and Mars – tonight’s homework. For my visual mind, far more practically applicable was the experiment we conducted during Friday class. We used something called a gnomon to determine the cardinal points – North, South, East and West. This process was extremely simple – we recorded the shadow of a piece of string (the gnomon) held vertical at hourly intervals, in relation to a circle drawn such that its radius was the same length as the gnomon. At the two points of intersection between shadow and circle, we drew a straight line – this was West-East. By drawing a second line, perpendicular to the first, we now knew North-South. The applicability of this experiment? Let me show you an excerpt from my group lab write up (the introduction):

Imagine you are lost in the woods. You do not know up from down, left from right, North from South. You know you need to walk South-East to reach the highway, from where you can hitch yourself a ride home, but you have no idea which way that is. You have the whole day ahead of you, until nightfall, to work your way out of the forest and back to the city lights. You come across a clearing in the trees, where a patch of light falls upon the forest floor. In your pocket, you find chalk and a piece of string. You realise: I can use these things to determine the points of a compass! And once I know which direction is which, I can walk on out of here. This is where the question “what can a gnomon tell you” comes into play. A gnomon is a simple, basically tools free method of determining the directions West and East, from which North and South can be calculated. It takes time – the shadow of the gnomon needs to be monitored every hour for a good part of the day, if true cardinal points are to be determined. But if you have time and a piece of string and a tool to write with, it could just be your ticket out of the woods. 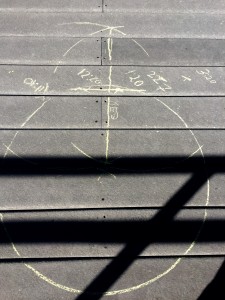 (This was what our gnomon experiment looked like – the straight lines show West-East and North-South, just like a compass!)

Scott is the Anthropologist in the room, and my Sociologically trained brain grooves much more quickly to the rhythm of what he says (though I must admit, tonight’s ratio equations did give me a strange but definitive sense of satisfaction). We have been delving deeper into the people that inhabited the South West/North West region, and gazed at the stars. We have been asking: What did they see? What did they make of it? Why, even, did they turn their eyes skyward? This week, we read about the symbolism of the hooghan – the house – for various Native American peoples. The belief system emphasises an interrelated and interdependent natural universe, of which humans are a part. The Gods built the first hooghan or sacred building, as a personification of our natural world. This, there is the physical hooghan of the earth, but there is also a wider, metaphorical hooghan, in which the floor is our Earth and the roof is the stars. The physical house is a site of ritual and healing, through sand painting and chanting, situated within the wider metaphorical house of our universe. Just as the physical hooghan will decay and collapse with age, so too will we humans. Spirits, however, remain – they may continue to dwell in the physical hooghan, just as they linger in the universe.

Something about this story of interconnectedness and interdependence spoke to me. In my opinion, our lives are carried out independently, yet exist as part of a wider network of living entities. As I have mentioned, the act of chanting was also highly important. To chant was to make something real. To put desire into the universe, at full power. I guess I think similarly. I tend to consider my thoughts as formless until I say them out loud or write them down. Before this, they exist only as a jumbled, coherent cloud. Words, formed through speech or writing, give the cloud form. It may take a few tries until I reach true coherence, or grapple what I truly think into words, but that action simply cannot be done within my own head. I don’t think in words, so my thoughts aren’t ‘real’ until I put them into the physical world. My class reflection has wandered a little down the path of personal retrospection, but why else do we educate?

I am a senior, Sociology major from the UK. I love life in Colorado, and particularly at CC - this is my first time living away from the ocean, but the beauty of the mountains do help compensate for the lack of water! Now that I'm in my last year, I live off campus with a group of friends but I spend a good deal of time on campus - at work at the Writing Centre, in class, begging underclassmen for swipes into Rastall, and meeting with professors. I also have an internship off campus, at the El Paso County Courthouse, where I help self-represented individuals (without a lawyer) navigate the confusions of the legal system. On the weekends (and afternoons... and mornings...) I love to spend as much time outside as possible, while the weather is good, hiking or having a good cup of coffee on my porch. View more posts