When I told some of my white friends that I was taking Critical Whiteness Studies, I was met either with chuckles or furrowed brows and questions like “What even is that?”

Let’s talk about it.

Are you white? If so, how do you know you’re white? Did someone tell you?

In “Growing Up White in America?” Bonnie Kae Glover argues, “White is transparent. That’s the point of being the dominant race. Sure the whiteness is there, but you never think of it. If you’re white, you never have to think about it. Sometimes when folks make a point of thinking about it, some (not all) of them run the risk of being either sappy in the eyes of other whites or of being dangerous to nonwhites. And if white folks remind each other about being white, too often the reminder is about threats by outsiders–nonwhites– who steal white entitlements like good jobs, a fine education, nice neighborhoods, and the good life” (34)

From this perspective, whiteness is only visible when in relation to “other” races. It’s there, as Glover states, but it’s not a charged category. Being white is neutral, while other races are abnormal.

For me, I thought I was white for a long time. Growing up speaking only English, I understood most of what my mom would say as she spoke rapidly in Spanish to our relatives, but I never concerned myself with learning the language. I was the light sister, with dark blonde hair as a child. The only indication that I was not totally white were my heavy eyebrows, inherited from my Chicana great-grandmother. It was only until I was in high school and began learning more about my family’s heritage did I begin questioning my whiteness. 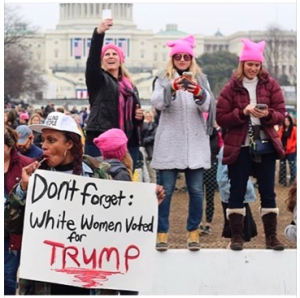 Even though I do not identify as white, I pass as white and people treat me like I’m white. I benefit from looking white, but I can also see its detrimental effects especially enacted upon my friends who are people of color.

Peggy McIntosh even writes a list of 46 items she is allowed to do as a white person to illustrate in more concrete terms what her whiteness affords her:

“17. I can talk with my mouth full and not have people put this down to my color. . . 25. If a traffic cop pulls me over or if the IRS audits my tax return, I can be sure that I haven’t been singled out because of my race. . . 40. I can choose public accommodation without fearing that people of my race cannot get in or will be mistreated in the places that I have chosen”(293-4)

Being white is not neutral; white is a race. Whatever your race is, in America it constitutes your experience– it decides if you can be putting pussyhats on police officers and taking pictures or if those officers will be charging at you in full riot gear on the street.

*Note I do not own these pictures*

I'm a senior Feminist and Gender Studies and Southwest Studies double major at Colorado College. I'm currently writing my thesis on the racial and transnational hierarchies existing at a birth center on the U.S. Mexico border. View more posts

4 replies on “What is Whiteness Studies??”