In the second week of this class, we watched the movie Dear White People. Have you seen it? It came out in 2014 and Netflix ordered a TV version of it, also named “Dear White People” last May. While there was some backlash at the time to a tv series of “Dear White People,” it was nothing to how many (white) people reacted to the trailer that was released yesterday.

The video garnered over 1 million ‘dislikes’ in one day, with many taking to Twitter, denouncing the show for being “racist” and encouraging “white genocide” and cancelling their Netflix subscriptions.

Let’s be clear. Let’s be super super clear. There is no such thing as reverse racism. You cannot be racist towards white people. All together now: Reverse racism does not exist.

Why is being racist towards white people NOT a thing? Because to be racist you need two things: power and prejudice. Racism connotes a system that disadvantages those based on race. Therefore,people of color cannot be racist– they can be prejudiced– but not racist because they do not hold power in a racist system and thereby cannot benefit from this system. 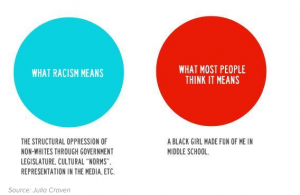 When white people argue that people of color are being racist toward them, it is just untrue because this understanding of racism refers more to when someone (usually non-white) makes them feel bad (cue white tears) for their identity. This understanding also completely ignores structural systems of oppression that has and does consistently disenfranchise people of color in obvious and in invisible ways.

In the online article “What is Reverse Racism and Why It Doesn’t Actually Exist in the U.S.,” Phillip Lewis argues “But in reality, the United States has a long legacy of racism that makes it difficult for people of color to receive quality health care, access affordable housing, find stable employment and avoid getting wrapped up in the justice system.” (hyperlinks in original)

Thus when white people cry “racism,” it ignores this legacy of racism that still disenfranchises people of color in concrete and tangible ways.

Let’s say it all together just to make sure the people in the back heard us: REVERSE RACISM DOES NOT EXIST

Rather, these conversations about “reverse racism” or a TV show that questions race has much more to do with whiteness.

In “The Social Construction of Whiteness” Martha R. Mahoney (1995) argues “Whites have difficulty perceiving whiteness, both because of its cultural relevance and because of its cultural dominance. . .like culture, race is something whites notice in themselves only in relation to others. Privileged identity required reinforcement and maintenance, but protection against seeing the mechanisms that socially reproduce and maintain privilege is an important component of privilege itself” (331). And, I would argue, protection against these mechanisms that produce whiteness is an important aspect of whiteness.

When white people operate off the understanding that racism is just when someone of another color is mean to you, it simply reinforces the category and supremacy of whiteness to begin with. Learn your non-white history, read some articles like this one or this, and stop pretending reverse racism is a thing.

I'm a senior Feminist and Gender Studies and Southwest Studies double major at Colorado College. I'm currently writing my thesis on the racial and transnational hierarchies existing at a birth center on the U.S. Mexico border. View more posts

One reply on “Let’s Be Clear: The “Dear White People” TV show Is NOT Racist”