This week in Bali, our class had the pleasure to witness a traditional performance of the Barong–a mythic creature of major importance in Balinese theatre and religiosity. This lion-esque beast contains two people controlling the costume, with one in the front and one in the back. Though seemingly a stage prop at first blush, the Barong’s mask is the product of rigorous ritual purification, and often is housed at the local temple when it isn’t being used in performances. In this show, the class reveled as the mighty Barong played with his monkey companion and later faced off against the evil witch Rangda. Interestingly, this classic fight always ends in a draw, thus representing the good and the evil within all of us. Filled to the brim with colors, action, and a gamelan music accompaniment to boot, this was an incredible look into the power of the Balinese arts. Curious what gamelan means? Tune in next time to find out! 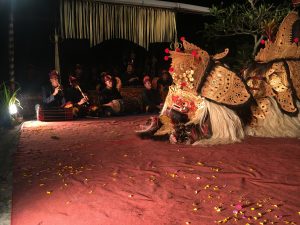 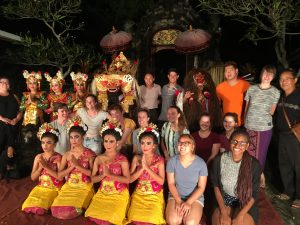 Hello there, denizens of the Internet! I'm Mark, and I'm a senior at CC from Lakewood, Colorado. I've been lucky enough to major in my two greatest passions--religion and sociology! Outside of class, I love biking, playing the guitar, and listening to whatever podcasts my phone throws my way!.This summer, I will be studying the culture and music of Bali in Indonesia! View more posts