On Thursday night, as we neared the end of another busy week, the students of German 202, and a few members of the Max Kade house, CC’s German language house, gathered together at Professor Ane Steckenbiller’s house to eat a delicious home cooked, Mediterranean dinner, and to play an exciting German murder-mystery game. The game was set at a dinner party, and was centered around a group of characters, each one played by a different player. Through a series of clues and dialog between players, it becomes clear that the characters all have some connection to one another, and some connection to a murder that’s been committed, and that the murderer is in their midst. The goal of the game was to solve the murder by the time the dinner was complete. It took three hours, but with the help of the two native German speakers who were present, and some ice cream sundaes, we successfully completed the game. 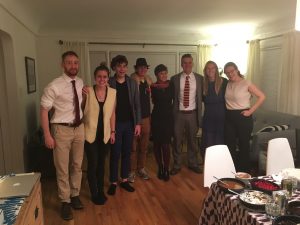