Major General William Hix walked into our classroom last week wearing a brightly colored, button-down shirt and a dark green suit jacket. He is older, soft-spoken, and upon first glance, you would not assume his extensive experience with the US army. Upon speaking with him however, MG Hix’s humble expertise became evident. 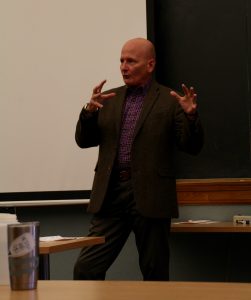 Having graduated from the US Military Academy in 1981, MG Hix has a Masters Degree of Military Art and Science. He currently serves as the Director of Strategy, Plans, and Policy, Deputy Chief of Staff G-3/5/7, Headquarters for the Department of the Army. He is responsible for developing strategies, plans, and concepts that shape the geo-strategic security environment, inform army decision making, and for anticipating and providing forces for national security. Previously, he spent time in other strategy and planning assignments, as well as on operational assignments with both command and staff positions.

Though MG Hix is quite busy, he is a good friend of Neal’s, and graciously took the time the speak with us. One of the most interesting parts of our conversation with MG Hix was his perspective on the global economy. MG Hix referred to the economy as a geopolitical force. He went on to explain how the economy plays a crucial role in shaping the geopolitical climate because it can give people the resources that they need to fulfill greater objectives. He described the world economy as a pie: you can either split it up, and while you might hope that everyone gets an equal sized peace, this will not happen. Or, you can make a bigger pie. The goal, Hix explained, should always be to make a bigger pie. 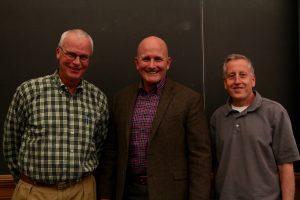 One part of the growing world economy that Hix explained was China. When asked how China’s growth would affect the world economy, Hix said that he expected the focus to shift East. He chalked this shift up to two main concepts: complacency of Atlantic nations and growth in technology. The former is related to aging. Hix talked about how, in Europe especially, Western nations are failing to see how their aging populations will negatively affect economic growth and present unforeseen challenges. In terms of technology, Hix expressed concern that Europe was not using automation to grow like China is. Rather, in Europe, which has some of the some of the most revolutionary robotics companies in the world, China has a large percentage of the shares.

The opportunity to discuss something so crucial and complicated with MG Hix was wonderful. He gave us plenty to think about, as well as a whole list of books to check out, and, with a nod to Neal, one final piece of advice: always find people smarter than you, and get them on your team.