Today we had the opportunity to talk to sociology professor Gail Murphy-Giess’s daughter, Patty. After spending two years in Togo with the Peace Corp, Patty returned to the United States in August and came to our class to discuss her experience.

Togo is a small country in the north west of Africa, wedged between Ghana and Benin. With only 8 million people, Togo has over 40 ethnic groups, with two making up the majority. The main conflict going on in Togo currently regards the political sphere. Midterms did not take place as planned, and though elections are supposed to occur in 2020, it is likely that they will not take place due to the intention of the current president to extend his terms. So, in the face of these conflicts, what is the role of the Peace Corp Volunteers?

Patty told us that volunteers are supposed to stay neutral, but that this is impossible. Patty was living in a small village with only a few thousand people. The official projects in the village included health and malaria prevention, english education and gender equity, and agriculture and food security, the latter on which Patty focused. In working on these projects, Patty formed close relationships with the villagers and found that they wanted to know her and, by proxy, the United States opinion on the happenings in Togo. When friends and villagers asked her opinion, she was inclined to engage, rather than stay neutral as the Peace Corp suggests. Patty also found that people had a great interest in the US in general. People felt positively towards the US, but were often misinformed on US intentions and policies. That said, the US was widely perceived as the land of opportunity, and everyone wanted to go there. This was especially true in the villages, where people were less inclined to protest, as they would in the big cities, and more apt to accept society as it is and hope for a better future in the US. 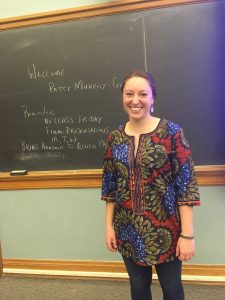 Patty also spent some time expressing concerns about NGOs. Though Patty, as a recent Peace Corp volunteer, comes from a very different background than the other speakers that we have had in this class so far, we found that her concerns lined up with the others that we have heard. First she talked about the concept “biopolitics,” which refers to how people view resources, who has power, and how agency is practiced. Because of NGOs, Patty said, biopolitics have shifted. NGOs often take the role of the state by providing, for example, teachers and health care. This creates a cycle of dependency, and takes the pressure off the state to provide for its people. Furthermore, NGOs often do not listen to what people actually need, but instead are motivated by outside interest. In other words, their work is funder-based. In contrast, the Peace Corp focuses on community based development and, because it is funded by tax-payers, does not have to succumb to external pressures for project.

So was her experience with the Peace Corp in Togo a success ? In many ways and in many places it can be seen as a success, and in others, a potential detriment. A crucial element in this discussion is impact evaluation. This is a fairly new idea. The Peace Corp, Patty explains is working on evaluating their human impact by standardizing methods of collecting data and using a needs assessment in every location. Patty admits that the process of impact evaluation is new and flawed, but essential to understanding how the Peace Corp can make the most change.